You Don't Have To Spend Thousands of Dollars To Try AR

Magic Leap's well-shared video is perhaps one of the best examples of how augmented reality could be used. Nobody knows yet when Magic Leap will be on the market, or how much it will cost. But the best-known augmented reality product on the market now is Microsoft's HoloLens, which is priced at $3,000, and is only available to developers—by invitation.

Don't fret. Consumers can still try out augmented reality with a low-cost mobile-based headset today. Augmented reality is popular with developers of Cardboard-compatible apps, for gaming and education. Plus, using these apps is fun. GearBrain has assembled a quick list of a few you can try now.

Peronio brings a pop-up book into an augmented reality view.

Peronio is a very cute interactive pop-up book for young children. The first eight chapters are free—but the full 22 chapters will cost $2.99. The app works in both augmented reality and standard virtual reality modes, and you can view the book with, and without, a VR headset. No controller is required: You just look at things to select them.

This app comes with an image that you download and print out. Put it on a table, call up the app, look at the image through the VR headset, and a small village will spring up on the table in front of you. Look at the yellow circles to activate monsters and watch them walk through the village. Unfortunately, the rest of the game is still under development. No controller is required.

Animated robots and other imaginary beings come into view with VR One AR.

With this app, you can print an image and assemble it into a cube, then load up the app and look at the cube through the VR headset. Little animated creatures, some look like robots, will pop up on top of the cube. No controller is required.

Turn your world in a painting with ViewR.

Look through your VR viewer, and then tap on the screen to see the world through a filter. Switch everything around you to black-and-white, invert colors, or apply a psychedelic blur effect. You tap the screen to switch to the next filter. The developer also has a collection of images that you can load on your screen, or print out, and looking at them will trigger a video or an animation. The app requires access to the smartphone screen.

Reality Hacker overlays filters on what you see around you.

Similar to ViewVR, this app can turn the world around you into a cartoon, among other effects. Select the effect you want from the menu, then put the phone inside your VR viewer. 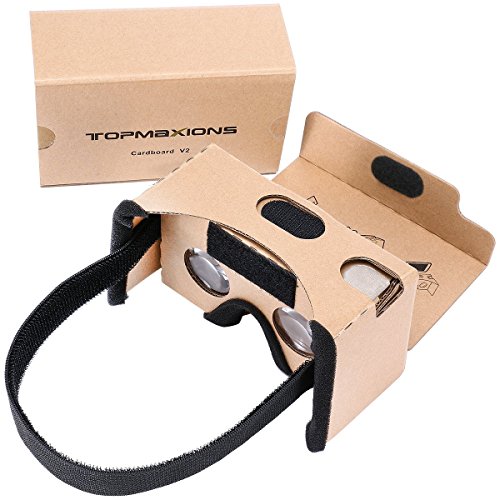