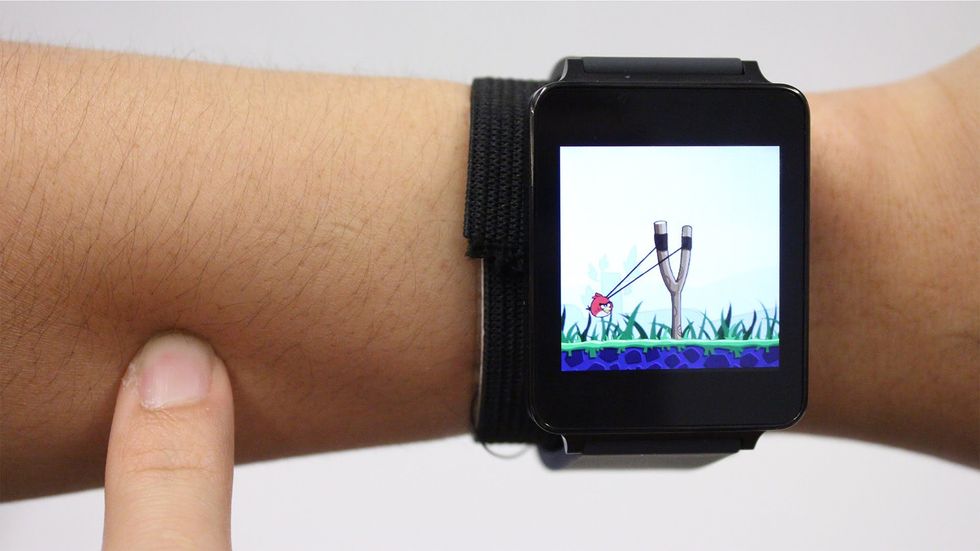 iRobot: Your Skin, Now A Device

Your Arm As Trackpad We're one step closer to using our body parts as computers. SkinTrack is a new technology that turns the skin on your arm into a touchpad to control a smartwatch. Researchers at Carnegie Mellon University's Future Interfaces Group developed the system which they've used to swipe, tap and even draw a picture on a screen. Users were also able to look up contacts in their address book by drawing letters on their skin. Yes you need to wear a ring to make the system work—and no one is actually planning to put this technology into your next Apple Watch—but using our skin as a interface for our devices is coming.

Google's Fender Bender The latest accidents involving Google and its self-driving fleet of cars resulted in a damaged side mirror and minor bumper impact in April. Both accidents took place in April, according to Google's monthly report. The tech giant has logged more than 1.5 million miles in autonomous mode since launching its self-driving car project in 2009, averaging between 10,000 to 15,000 miles a week.

Self-Driving Cabs Hailing a self-driving cab? Soon. General Motors is working with Lyft, to build self-driving electric Chevrolet Bolt's as potential cabs. The cabs would be tested first on California's roads. (Via The Detroit News.)

25 Hours On VR We would never recommend this, but a man in California has set a Guinness World Record for spending more than a solid day on virtual reality headset HTC Vive. His app of choice? Tilt Brush, a painting application that lets you create your own images. And yes, he threw up. Once.

Karma Is A... GoPro announced a delay for its drone, Karma, until the holidays. Expected to launch by summer, Karma is taking longer than customers, and analysts, expected. Karma, a drone-camera chimera, is entering a very crowded marketplace. Still, GoPro is considered the brand for extreme cameras.