Divoom's new AuraBox packs a wide range of gadgets into one small device: a Bluetooth speaker, an alarm clock, an art platform for both animation and design (complete with a gallery for inspiration), and even a lamp that will project the color of your choice. What's more, it can be completely controlled by your smartphone or tablet.

I opened my box to find a cord, an instruction manual, and the AuraBox itself. The instructions were quite simple: Open the AuraBox, charge it, pair it with your iOS or Android mobile device, and start playing.

AuraBox tells the time—but that's just the beginning of what the device can do.GearBrain

I was first given a quick introduction to what the five buttons did. That was easy enough to remember, but the buttons were very stiff and hard to press. Unfortunately, this was not a problem that fixed itself, and the buttons didn't loosen up over time. Later that day, I downloaded the app and charged my AuraBox overnight.

I encountered another issue when I put the AuraBox on my desk. The AuraBox cord was quite small, and would only reach the outlet if the box was on the very edge of my desk. That limited where I could put the device, and I had to move things around to suit the AuraBox. 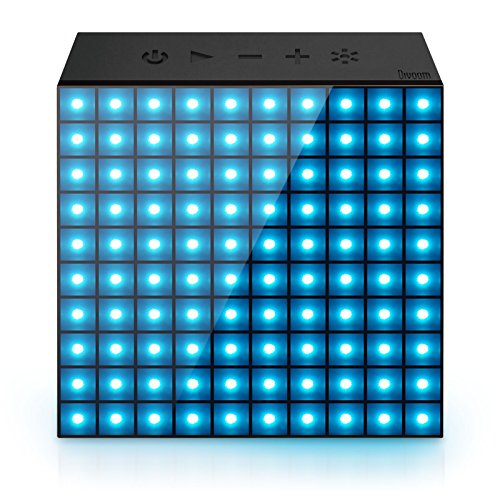 Once charged, the AuraBox quickly paired to my phone and corrected its display of the time. I went straight to the art section. There, I could draw what I wanted on my iPhone or iPad and then click 'Play,' where the image would show up on the pixelated face of the AuraBox until I wanted to change it. If I wanted to switch back to displaying the clock, for example, but I didn't want to delete what I'd made, I'd just save my work and come back to the image later. The catch? I had to draw it Minecraft-style, because the AuraBox is a 10 by 10 grid of pixels.

Next, I wanted to make some animations. I planned to draw a little cartoon of a spaceship landing on a moon. But again, my plans were cut short—I only had six slides available to me to make my pixelated animation. So I settled for a dart going into a dartboard—a success.

I also turned on notifications. Whenever I got a text or phone call, a blinking notification button would temporarily appear all across the screen. What's better, if I got a call, a call icon would appear and if I got a message—you guessed it—a message icon would appear. I could know if anyone was trying to contact me, even if my phone was in the other room. I could also turn on notifications for Skype, WeChat, WhatsApp, and more.

Each notification has its own little pixelated symbol. That was helpful, but it would have been better if there was an option for the notification to make sounds, because if I wasn't looking straight at the AuraBox when the notification came I would miss the alert.

I quickly learned that the AuraBox doesn't hold a lot of charge, so it's easier just to keep the box plugged in full time. But remember, that cord wasn't very long, so the permanent spot for my AuraBox is officially the edge of my desk.

I left the display on what the AuraBox app calls "The Soul-Relaxing Halo" which is a light that will shine any color that you choose. I chose yellow, and the device complied.

Another issue—at first, my AuraBox would spontaneously disconnect from my smartphone, usually when they were both in different rooms. The box would beep and flash the bluetooth icon until I brought my phone back and reconnected. This happened twice while I was home. But there were no issues when I took my iPhone with me on a trip to Los Angeles, California.

Stiff buttons, hard to catch notifications, and spontaneous disconnections aside, my AuraBox was definitely better than an alarm clock; there's simply more you can do. You can check the weather, or even turn on music while you get ready to leave. An AuraBox will support you through your entire morning process and—for those of us who are not morning people—make it a lot less painful.