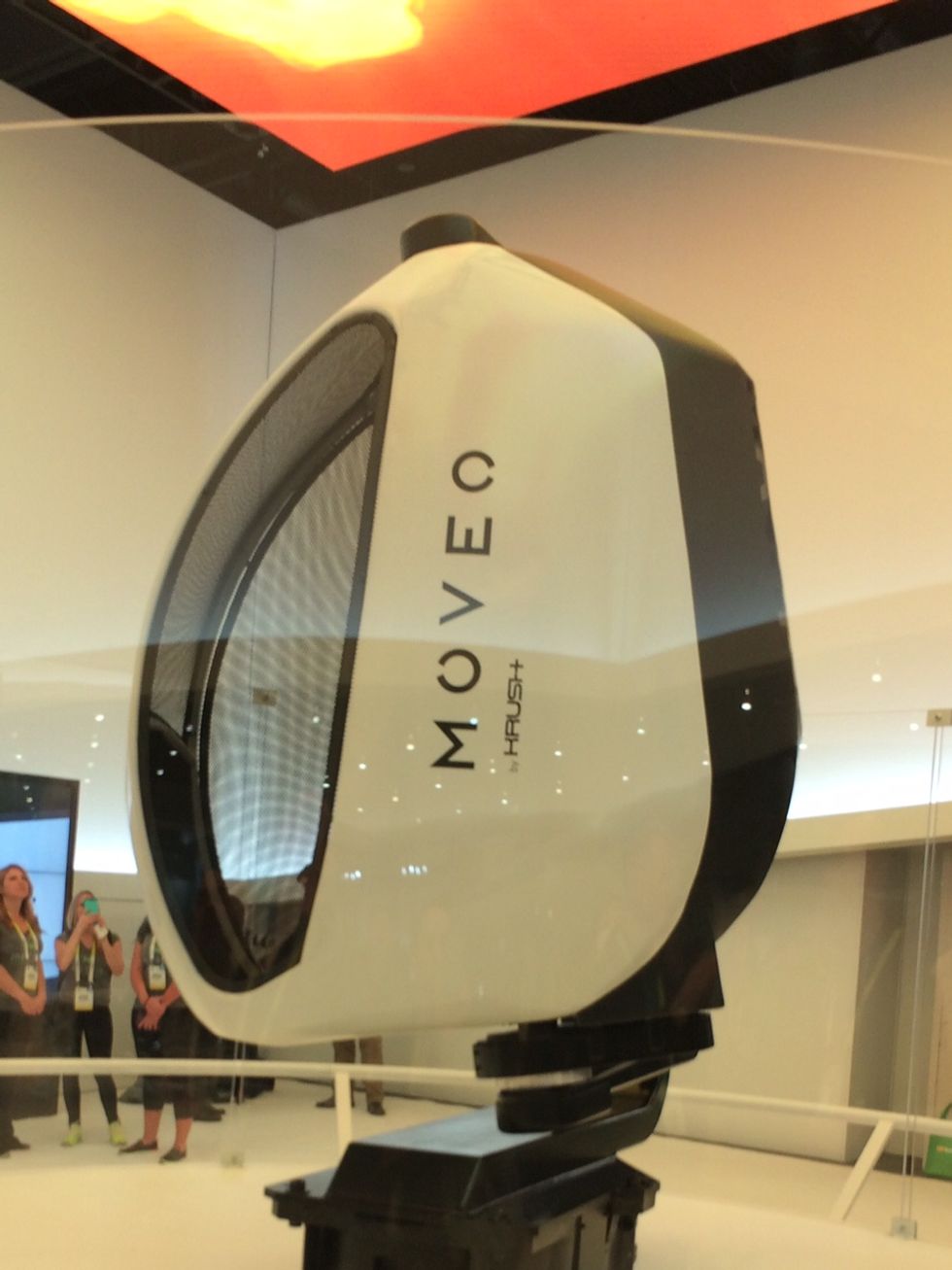 Five news bites to start your Friday, live from CES.

That giant human pod above? Meet Moveo, a concept project from software maker Krush, better known for its emotional sensing technology in products like gaming app Flinch and dating app Heystax. But the Dayton, Ohio-based firm is thinking about VR — and the connection between people and machines. Hence Moveo, which the firm hacked from Oculus Rift glasses and other tech, to build a VR immersion experience. No real production date planned as of yet. But interest from the floor was high, says Tom Thistleton, Krush's vice president of services and operation.

Are your shoes Bluetooth'd? They probably will be. While consumers are strapping on all sorts of devices to measure their steps, and other fitness metrics, Digitsole wants wearers to just tie their laces. A new prototype'd sneaker will embed a fitness tracker directly into the smart shoe, with consumers able to view their data via an iOS or Android app. The Nancy, France-based shoemaker already has the chops behind making shoes, and expects to have their IoT waterproof footwear on the market sometime this fall. Pricing? Think high end, says national sales manager Bill Davis.

The dokiWatch is one of several smartwatches now aimed at kids. Its founders want to fill the space between too young for a smartphone — but old enough to have some freedom to wander away from their parents. Doki, which is running a Kickstarter, aims to hit markets in May, and would permit children to make phone calls and connect with friends, but let parents create geo-fencing and know if their kids didn't go to a friend's house as they promised. Founder Casper Chen believes parents will love the controls. We're just curious what kids will think...

Products that promise to understand emotional states and even stress levels are playing front and center this week at CES. Spire is one. The $149 pebble-shaped device tracks focus, stress levels and even calm states by measuring your breathing and reading the expansion of your thoracic cavity, says Neema Moraveji, Spire's co-founder, who also runs Stanford's Calming Technology Lab where the app developed. Moraveji chatted about his product at the R29 Dreamer's Suite at CES, talking about Spire's new guided breathing exercises from Deepak Chopra — for those who need more than a nudge to find their zen.

Finally, Owlet nabbed an 'Audience Favorite' award from The Bump Best of Baby Tech Awards at CES. The smart sock is fitted to an infant, using LED light to read how well a baby is breathing, using a pulse oximeter, that sends data to a smartphone app. The venture backed Owlet also has a $1.5 million grant from the National Institutes of Health (NIH) to run a study for potential use in hospitals. The $249.99 Owlet launched in October, and clearly has fans.