Erasing your children, plus other tales from the future 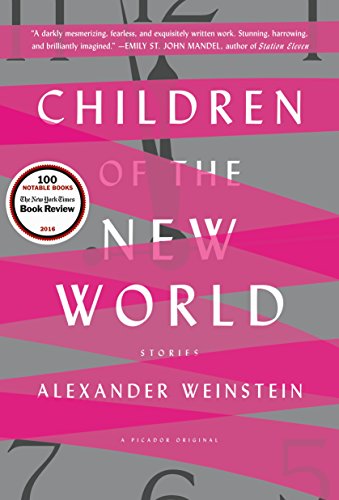 Robotic brothers, virtual memories hardwired into your brain, and contact lenses that record video with a blink of the eye. While not true today (yet), these visions of digital dependency wend through Alexander Weinstein's short story collection, Children of the New World (Picador, 2016) a landscape that looks towards the future with a bleak eye.

We are so jacked into digital media that we spend more than 10 hours a day consuming some form of media, according to Nielsen. Not surprising, more than 16 million references to "how to unplug" appear after a quick Google search—it seems we want a way to disengage. But Weinstein suggests a world where the opposite is true, where we willingly gravitate to pixels and code. In his stories—which link together tentatively but also stand on their own—technology has tentacled into our daily lives changing, and challenging, our idea of family, community and even love.

A fiction writer, yes, but Weinstein's understanding of technology is solid. Each story presents a device or digital tool that is pinned to something in use today. In "Saying Goodbye to Yang," the family robot breaks down. Purchased as a surrogate brother for a couple's daughter (whom they choose to adopt instead of cloning themselves), Yang is taken to a repair shop after a series of errors renders him a danger. But he can't be fixed, and is instead brought home and given a burial.

In "The Cartographers," Adam revels in a love affair which has been upload, unknowingly, into his brain. When he discovers the farce he mourns less his girlfriend leaving him, and more the truth that the affair, truly, never occurred. As Adam notes (and Weinstein writes), "Love scars memories; even if it was never real."

In "Rocket Night," a story which owes a nod to Shirley Jackson's "The Lottery," a family heads to their daughter's elementary school—where amid homemade cupcakes and Hawaiian Punch, a child, an outsider, is sent into space, forever. "Children of the New World," tells the story of a couple who lose their virtual children. When malware infects their home system, they must delete the malicious code—along with their digital offspring, bits and bytes that have woven themselves into the couple's very real hearts.

I took note of his author's photo on the paper book's jacket: Weinstein, barefoot, bundled on a cool day, in a down vest, on a beach, his toes buried in the sand and surf. I thought of the support group one of his character's attends, in "Children of the New World," folded into a hug, with "...nothing electronic about the gesture, no hum to the body, only the warmth of their breathing and the beating of their hearts."

Technology is a wonderful tool. A pen is a form of technology. So too the oven that heated your dinner, and the light that lets you read this piece. Technology has let us touch moon dust, bypass shuttered arteries to extend life, and send a virtual hug from a parent to a child. But Weinstein seems to be warning how easily, and casually technology, could stop enhancing our lives, and envelope it instead.