Notion is a sensor that multitasks like a champ, but offers few integrations

Sensors are the micro devices that smart devices need to run. These elements pick up on details from water on the floor, smoke in the air, or even a change in temperature. Notion is a three-pack of round sensors, designed to look like oversized tablets that speak together through a hub. They can pick up on multiple details including water leaks, smoke, carbon monoxide alarms that are going off, even temperature fluctuations and movement. We put Notion's Starter Kit, which the company sent us, to the test to see how its sensors fared.

Notion is a pretty easy set-up. Removing tabs from each of its sensors gets them working. With removable stickers on the back, they can be placed on a flat surface like a floor, table or shelf, or stuck to a wall. Each sensor can pick up on sound, like a smoke alarm going on, movement, such as when a window is opened, and heat as in the air conditioning not working. The sensors work on AAA batteries which should last two years, and Notion says it will send an alert when they need replacing. 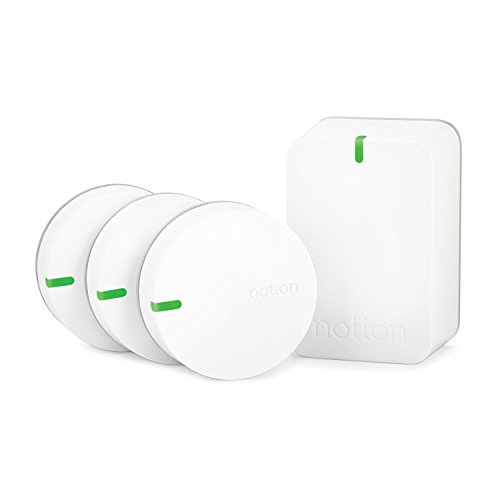 The sensors all connect through a bridge — which looks like a small rectangular white brick, and must be plugged into a power source to work. The bridge takes some juice to run. When we plugged it into a power strip, and then tried to plug in a charger for our iPhone, the strip sent out one of those alarming bleeps — a notice that an overload was possible. Bear that in mind when thinking about where to plug in the bridge.

Sensors don't need to be within eyesight or even that close to the bridge. In our 1,000 square-foot space, we put a sensor in our living room, near the bridge, one in the kitchen near a smoke alarm, and one in our bedroom. They all communicated easily with the bridge, which does however need to connect as well with your Wi-Fi router. Notion suggests plugging the bridge near your router — and we did, about three feet away, and that worked well.

You need to pair each sensor to the bridge, making sure they connect. We had a bit of trouble with the bridge reading the sensors. They eventually did, but have some patience. This could take a few tries. When everything is lit green on both the bridge and the sensors, that's when you'll know they're talking to each other.

You can place Notion sensors on a wall, window or on the floor.Notion

Each sensor is labeled in the app, so when something is detected you not only know what's happening — but where, in which room.

The app sent notifications often. It's tricky with sensors, as ideally you're hoping you won't hear from them. In other words, the goal is to not have a flood, not have someone break in, and not have a smoke or carbon monoxide alarm go off in your home. Temperature changes? That probably going to happen, so that is what we tested for the most.

With a large dog recuperating at home after knee surgery, we wanted to use Notion to keep the space comfortable for him, and know if the room was getting too warm. Notion pinged us often — mostly at night before I went to sleep. There is a night setting which lets you silence the alerts while you're sleeping. Presumably while you're at home you will hear alarms going off and not need to be notified.

The Notion Starter Kit works with both iOS and Android devicesNotion


Notion costs $219 for the Starter Pack and $299 for a bigger package with two extra sensors. You can also buy additional bridges and sensors, starting at $49. For a larger space, a home that has a basement, a garage and multiple levels, it's likely you'll need additional sensors and bridges to adequately be covered.

For $219, Notion is not a bad investment, particularly for anyone who doesn't have a lot of smart home devices in their home, like a smart security camera or a video doorbell, and wants to keep tabs of basic information like alarms going on and off, or potential movement — and especially temperature changes. A vacation home would be an ideal situation for Notion, a space that's used maybe on weekends only and needs a little coverage since you're not always there.

Notion is limited, though, in what other smart devices it can communicate it with — and for smart home experts this isn't great. For now, Notion sensors connect with Nest thermostat. That's helpful to adjust and maintain temperature settings, and Notion may be able to tell you, then, if the Nest device is also not doing its own job. Notion has also inked a partnership with HomeAdvisor, alerting plumbers to reach out within a minute's time if a sensor picks up on a water leak.

We think, though, that additional partnerships are needed to really make Notion a more robust offering. Notion certainly pulls its weight as a sensor that covers water, temperature, alarm and movement changes in a home. That's a great deal. You just have to decide if buying a product that still hasn't made a lot of friends with other smart devices is the right move for you.