How Consumer Drones Will Shape 2017

From racing leagues to delivering medical supplies, we expect consumer drones to take flight in the new year.

Consumer drones have captured the public's imagination—from quadcopters you can buy for fun and race, to those that are starting to deliver your purchases within minutes. Amazon's latest news of its pilot program, Prime Air, is just such an example: A bag of popcorn and 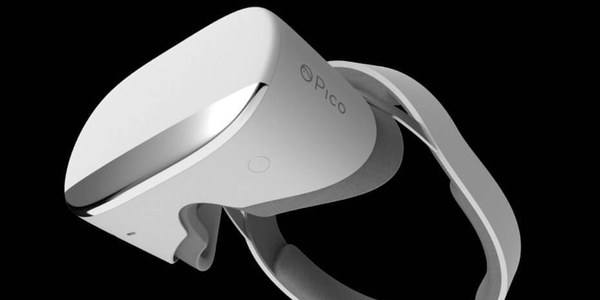 For virtual reality to really get its consumer legs, untethered headsets are going to be required. We saw some movement at CES in that direction, but were especially intrigued by the Pico Neo CV Headset, set to launch this year. Using the Qualcomm Snapdragon processor, the Neo CV Headset is absolutely wireless—so much so that we became worried we would stumble into something (a table, wall, people) during our demo. We think this is the next direction for VR, and Pico is one to watch. 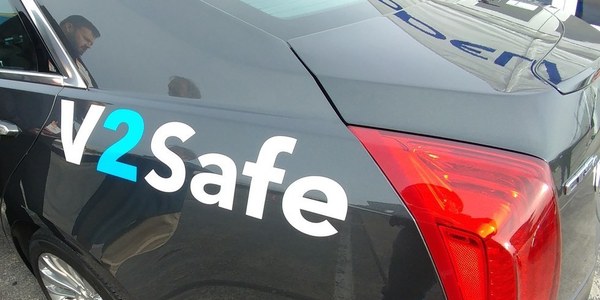 We appreciate Delphi's work in the autonomous driving sector, and Delphi's test Audi SQ5 at CES was a solid, safe and smooth experience according to our car reviewer. 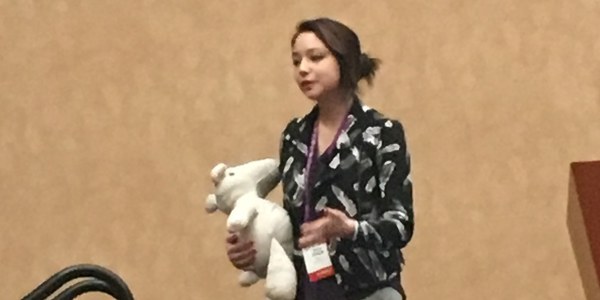 Have you ever been on a business trip, or away from home, and just wanted to get a hug from a loved one? Parihug, seamlessly integrates touch into its plush IoT toys, allowing users to hug the device and in return get a hug back in real time from a loved one. Don't worry if you are not around when your loved one wants to hug you. The company has a smartphone app that will send you an alert when a hug is waiting. 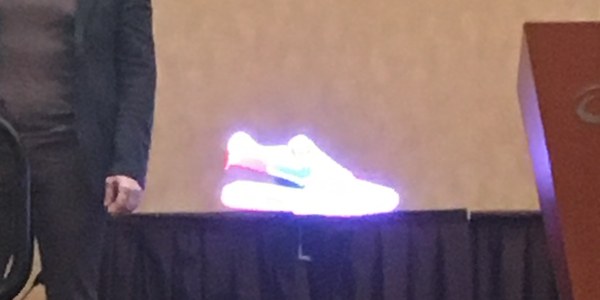 Kino-mo allows 3D videos and images to float in the air as holograms. Their technology is designed for the retail space and is a good way to promote products or brands. 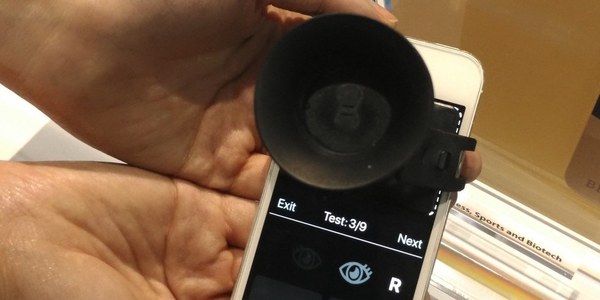 One of the winners of the CES Innovation Award for 2017 for Best of Innovation, Eye Que, a personal vision tracker, is a real standout for health management for eye care. Snapped right on to a smartphone, the device tests eye health in between regular doctor visits. While it cannot replace a visit with a doctor or provide prescriptions, Eye Que does allow those with eye issues to stay abreast of their eye health and any changes to their vision. See your eye progress on the online personal dashboard and get helpful tips for healthy eye care and vision. Eye Que, priced at $30, runs the eyes through a battery of tests, taking about 20 to 30 minutes from start to finish. 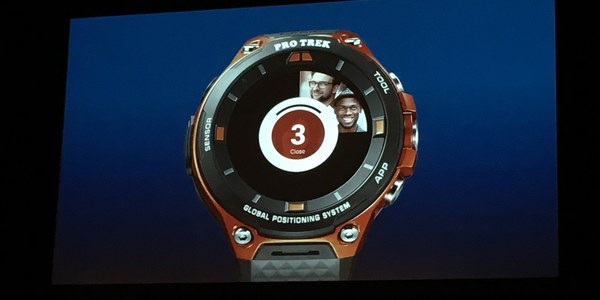 Casio's latest smartwatch, the Pro Trek Smart WSD-F20, caught our eye because of its look—and its GPS ability. The wearable also include Android Wear 2.0. This is a chunky beast, meant for rugged use rather than dress up, although that probably depends on your idea of a night out. 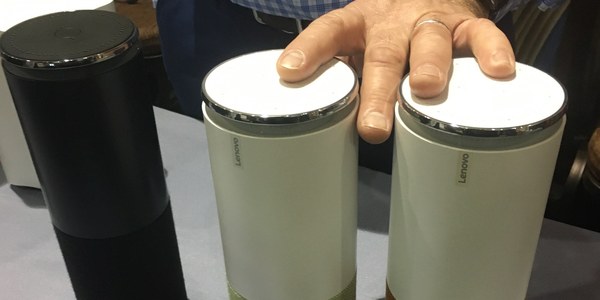 Lenovo launched their new Lenovo Smart Assistant this year at CES. This new connected devices looks like Amazon Echo and uses Amazon Alexa technology. it uses Wi-Fi and Bluetooth technology to connect to your devices which you set up using the Lenovo app that links to Amazon Alexa skills. 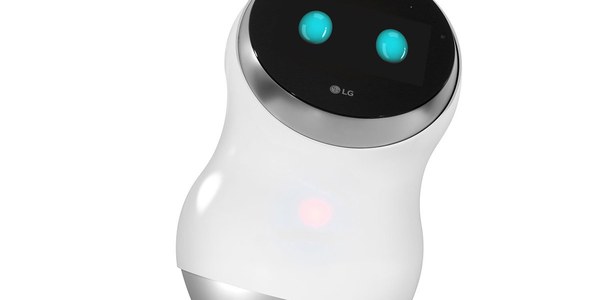 LG's Hub Robot, is a smaller, desk-sized creature, with WALL-E-like expressive eyes, that looks to sit on a desk or table. Hub can control your appliances—like your robotic vacuum cleaner—play music and even talk with you, and works with Amazon Alexa. The robot has life-like qualities that include the ability to nod its head, and also display facial expressions on its screen. We're seeing more interest in crafting robots with personalities. The Hub Robot falls into this trend. This clearly meant for the home, a consumer device that will come in two different sizes, a larger one and mini-versions that could be placed in different rooms. No word on when this will come to the consumer market. 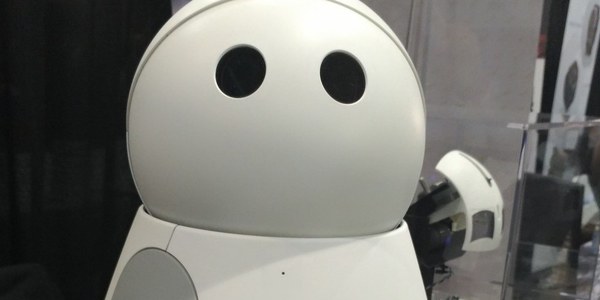 With two of its co-founders coming from Bosch Advanced Research, Kuri Robot is built from the ground up with solid robotics. Kuri comes from Bosch's Mayfield Robotics team. The device has four microphones allowing Kuri to locate sound, react to voices, even detecting unusual sounds to know which way to turn. A camera and speaker is also on Kuri, as well as facial recognition. All of these help Kuri react to people around it, and helping Kuri develop a personality that the company says is "adorable and approachable, but still earnest and helpful like the best pets." 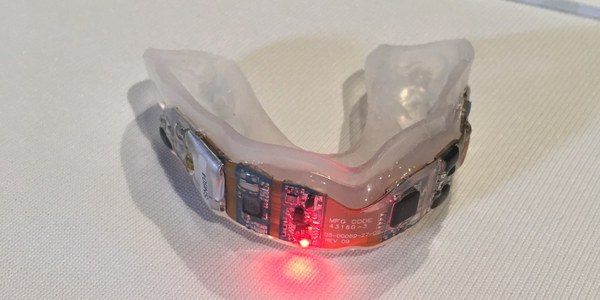 Have you watched how the NFL or college football handles concussions? Wouldn't it be great to have a way to determine if a player had a concussion and turn that into a data driving process? Prevent Biometrics has come out with a new head impact monitor that can accurately detect potential concussions, particularly great for younger players. 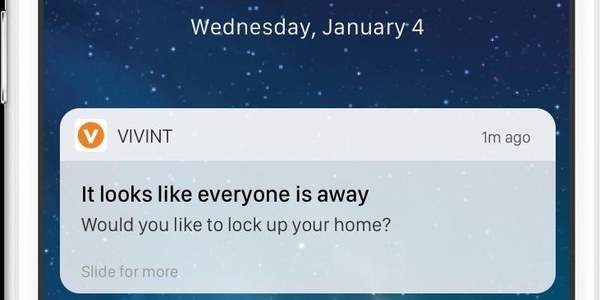 We're intrigued by Vivint's play to be not only a smart home platform—but link this to your energy usage. Vivint spun off Vivint Solar, and is also its sister company. And Sky will be woven into Vivint Solar allowing Sky to make decisions on when to more intelligently run devices based on energy costs. Vivint Solar customers will now be given access to Sky, a Vivint Element Thermostat and home sensors as part of their pre-existing package. This way, Vivint says they'll have more insight into the energy they're producing via solar, and what they're using as well. That element should be available later this year, but Sky launches now. 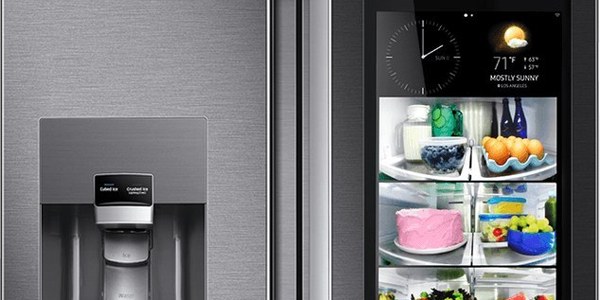 If you want a higher-tiered model fridge, Samsung is willing to oblige. Its next-gen smart refrigerator will now use Samsung's own voice control system, and be priced, we believe, close to (or around) $3,000. Of course there are cameras inside so you see what you need to buy without opening the doors, and you can place online orders through the Groceries for MasterCard app. 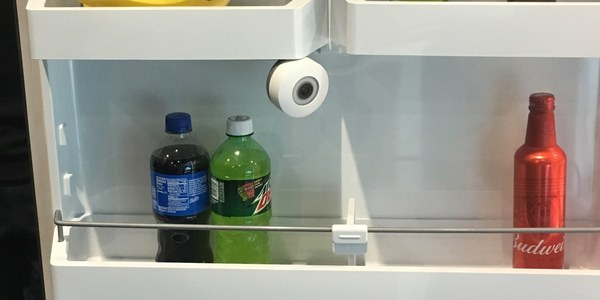 Who hasn't bought an ketchup or mayonnaise at the grocery store only to find two extra hiding in the back of your fridge? Big brands finally get this—from Samsung to LG—putting cameras inside their top end refrigerators. But maybe you don't want to pluck down thousands of dollars? You don't have to. The Smarter FridgeCam is a new wireless device that you place inside your existing refrigerator, connecting to your iOS or Android smartphone through the Smarter app. The best part? The feature is yours for about $125. Smarter is now allowing people to pre-order the device, shipping sometime this spring. 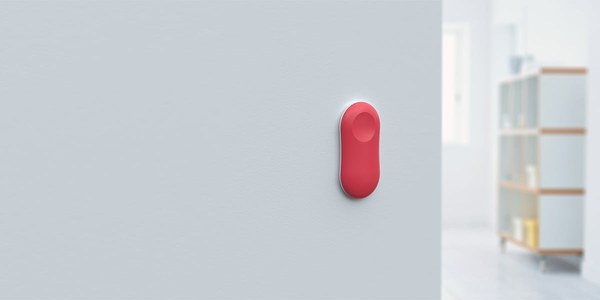 Finally, we love Sense Peanut for its easy of use and the way consumers can dip a toe into the smart home space with a low price-point: just $29. Peanuts are small sensors that are placed in the home and do just one thing. ThermoPeanut measures the temperature is a space, and alerts you if the range you've selected changes. (Ideal, for example, for a dog kennel or a nursery). GuardPeanut can tell when something has been moved—it's a motion detector—and alerts you. Next up is SleepPeanut, which should ship in February, and tracks your sleeping patterns. MedPeanut will be next, triggered if you haven't taken your medication by a certain pre-set time. (This peanut will be tied to the prescription bottles.)

" target="_blank">an Amazon Echo reached a buyer in less than 15 minutes in the United Kingdom. We expect to hear more of this kind of delivery system in the new year.

There are far more than these examples, which this infographic from BargainFox below outlines. From delivering health care to Wi-Fi, drones are a way to bring services to remote areas that may not be easily reachable by traditional methods. Drone startups alone raised more than $450 million in funding—and 2017 is expected to be more. Take a look.