I had a tough decision this past Saturday: Head out to the field to spend the day flying with my friend Bob, "BaveronaFVP" Averona , or attend the U.S. National Drone Racing Championships (Drone Nationals) on Governor's Island—the first nationally televised drone racing event in history.

I've been to drone events like this, with amazing tracks setup for top pilots and race teams. But I find I spend the day separated from the real action, and am left wanting to go home and fly FPV (first-person view) drones myself.

Sponsored by ESPN, the Drone Nationals was different—fun for non-hobbyists, as well as those pilots who aren't quite as skilled as this level (read: just one-quarter as fast). For just $10, I snagged a trackside ticket, with access to the pits, trackside viewing, drone racing computer simulators, free and discounted swag and equipment. But more importantly? I got up close with the organizers, the pioneering technology companies behind drone racing, and the pilots I follow so I can progress with my own racing skills.

Waiting for the first Governors Island ferry of the day, I hit gold straight-away. I first met Travis "Moke" McIntyre, Bapu "BapuFPV" Madhu, a member of Team Spektrum, and other racers that I regularly watch on YouTube. On the ferry I got to chat with Chris Thomas, founder and organizer of MultiGP, one of the most successful first-person view drone racing series, and also chatted drone pilot Alejandro "AlexFPV", Villa who was more than a bit surprised that Bob and I knew exactly who they all were. Yes, we asked for their autographs.

When we arrived on the island the Fixed Wing class of drones was already practicing on the track. These are single motor drones made from styrofoam, and similar materials, capable of flying over 100 mph even while upside down. This gave us time to check out the pit tents and get advice from legends like Alex "IbCrazy" Greve of Visual Aerial Systems, makers of arguably the best video transmitter and receiver antennae on the planet.

Checking out pit tents before the racing started.Photo by Jeremy Wyckoff

My first question? How to get better reception when flying around my house from the backyard. Greve gave me a solution, plus four handmade antennae, which will allow me to not only fly around the house clearly—but, almost better, allowed me to go more than twice as far then I ever have at the park later that day. Amazing.

We also met all of the Rotor Riot crew, some of the best drone pilots in the world, and also have one of the most watched, and informative, FPV YouTube channels around. These guys include Steele "Mr Steele" Davis, Carlos "Charpu" Puertas, Chad "FGA" Nowak, and Tommy "Ummagawd" Tibajia. They, and everyone we met, were so down to earth and humble I was blown away.

Cooling down, drone-style.Photo by Jeremy Wyckoff

By the time multirotor racing started, the weather had heated up so much, I saw one guy fanning himself with a drone. The course was fast, high and technical, plus featured a spectator's "fishbowl" where you sat on the track—behind plexiglass—as drones whizzed by your head. Some of them crashed, smashing into pieces. One even got stuck 30 feet high in the safety netting. (Good luck getting that back.)

Zachary Thayer, of team Big Whoop, ended up the big winner of multirotor races, held Sunday. And my final verdict? A huge score of a day. Great food, plus 20 percent off anything sold at the booths, meant I spent way too much money on parts including batteries, motors, wires.

One of the many booths that lured me. Photo by Jeremy Wyckoff

I bought the aforementioned antennae, so I could build the custom Shendrones "zoompod" Andy Shen was gracious enough to print for me after I messaged him the day before. The event was far better than I could have imagine, and if you know me that is is a bold statement.

Signed receiver antennae I bought at the event.Photo by Jeremy Wyckoff

-Jeremy Wyckoff is GearBrain's drone review and an expert FPV and freestyle drone flyer, builder and racer, who last reviewed the Sky Viper V950HD drone for GearBrain. Wyckoff's spends 4 to 6 hours a week flying drones, including five that he built on his own. Riding motorcycles for the past 16 years, Wyckoff started stunting in 2004 after a crash left him with 70 staples in his leg. He still pushes the limits, but in "..closed areas like parking lots, where there are no cars, obstacles or other distractions." Although bikes of all kinds are his passion, you'll also likely find him on a skateboard, snowboard, unicycle or rollerblades. Check out his YouTube page here. 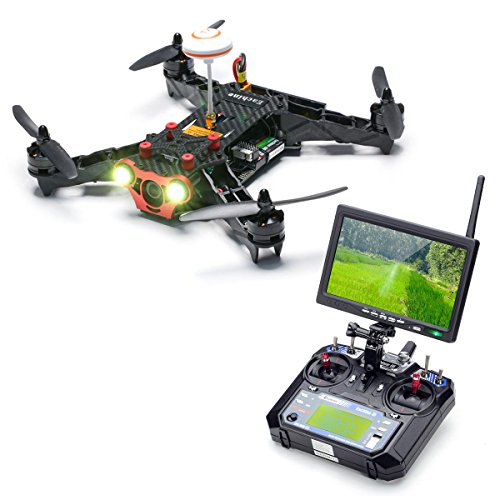