Pokémon — Nintendo’s 20-year-old creatures popularized in video games and trading cards — are on track to pop up in your everyday life. An augmented reality game, Pokémon Go is now in beta, and expected to appear in 2016, teasing players to locate and capture Pokémon in their real world surroundings.

How easily can hackers get into your home network? Vectra Threat Labs published a detailed step-by-step on how to do just that: hack into a linked home system through a $30 webcam. IoT devices, which connect one device to another via Wi-Fi or Bluetooth are a potential security minefield as a hack of one device can mean access into the rest.

Google is going all-in with VR following the move of Clay Bavor (who previously oversaw the launch and development of Google Cardboard) to focus solely on the tech, according to Re/code. Bavor is expected to focus full time on VR, and run Google's virtual reality team.

L’Oreal may be one of the first make-up brands to embrace the Internet of Things. A new wearable bandage called My UV Patch will be able to capture how much UV exposure a wearer’s been exposed to at any time — and is set to launch this Spring. The development of IoT health gadgets is growing as sensors are now able to more easily capture, and deliver, the medical data of users.

Finally, a UK theme park, Alton Towers plans to open a VR rollercoaster this Spring. The ride may sound a bit excessive. After all, virtual reality rollercoasters, like VR Coaster, are already a mainstay in this nascent tech. But riders of Galactica, say the amusement park, will experience a G-force ride — while thinking they’re in outer space. Not sure Oculus Rift can promise that. Yet. 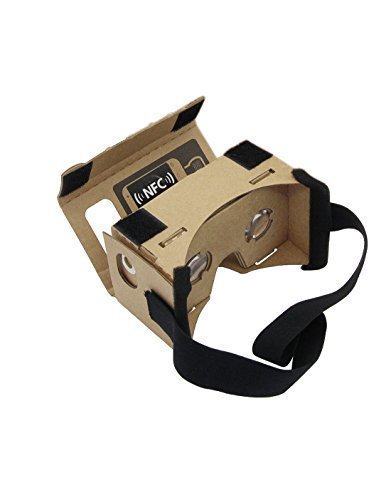 Linkcool Cardboard 3d Vr Virtual Reality DIY 3D Glasses for Smartphone with NFC and Headband
New From: $9.88 in Stock
Used From: $39.00 in Stock
Like GearBrain on Facebook
Show Comments ()
The.Gearbrain