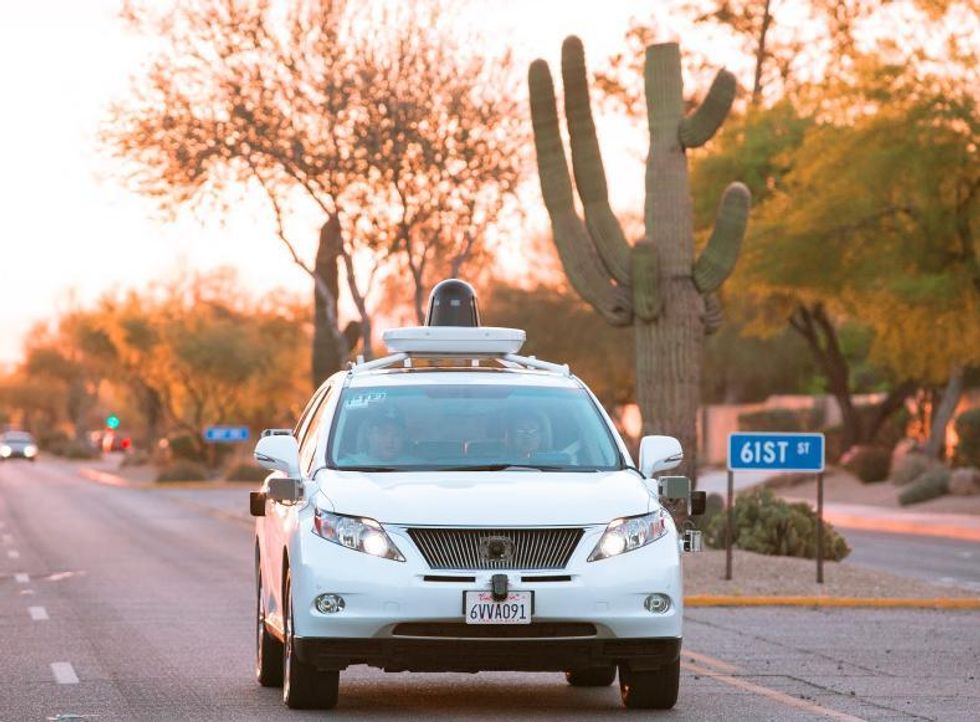 Google Job: $20 Hour Want a slightly better than minimum-wage job? Google is eager to hire people in Phoenix, AZ to test their self-driving cars, specifically a Lexus RX450h SUV. No, this doesn't mean you can sit and sip lattes while reading your favorite tabloid. Google's job description calls the job a "vehicle safety specialist," and wants people who are willing to monitor software systems, have a Bachelor's degree and be able to stay mum about what they're doing at work. Applicants must also have a "clean driving history" and be "open to travel." Thinking that part might be sightly obvious.

Spear Vs. Drone A man dressed in medieval clothing, and outfitted with a spear, brought down a drone in Russia during a festival. The drone, kitted with a camera, shot the entire experience: including the part where the device was knocked from the sky. Presumably the re-enactor believed the drone was part of some medieval witchery, or a dragon in disguise. The drone's owner is reportedly talking to festival organizers about officially adding drone spearing to next year's event. Drone. Dragon. Makes sense. (Via UPI.)

Spider Drone Stanford University researchers have designed a drone to take advantage of "perching:" land on vertical walls, even upside down. Yes, just like a bug. The drone sends off what students call a "tail," which appears like an anchor, sticking to the wall and allowing the drone to then land. Researchers designed the system to consider ways drones can collect data when not hovering, with landing options other than the ground.

Wearables Everywhere Nearly half of all Americans own a wearable fitness band—with more than a quarter using a smart watch, according to a new PwC survey, Consumer Intelligence Series. Looking at 1,000 consumers in the U.S., PwC found that 49 percent say they own a wearable device, but include smartphones in that group. Age played a factor: Millennials owned wearables more frequently than older respondents. The exception was smart watches, owned more by those between the ages of 35 to 49.

Tesla Model X In China Chinese car buyers can finally get their hands on a Tesla Model X—but at a 25 percent price bump than what their U.S. counterparts would pay. Cars will get delivered starting this month.