An alarm and tracker that attaches to your smartphone, sending alerts for help

Personal safety trackers are designed to bring help by sending alerts, contacting authorities or reaching out to friends and families. All need to be worn or carried close to the body. With Katana, its device, called the Arc, is stuck on the back of a smartphone so it's never forgotten, and always there when needed. Katana lent us a device, and we spent some time testing how well it worked bringing assistance when we requested. 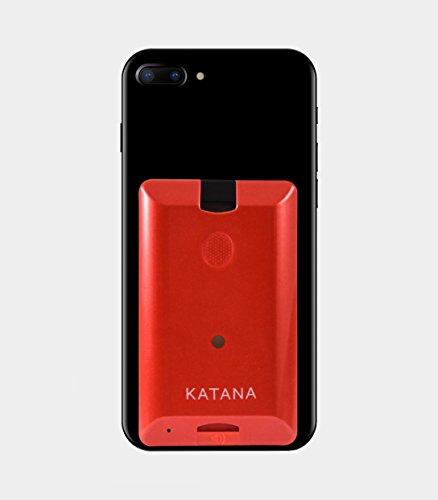 You can wear the Katana Arc around your wrist, so when it drops, the red tab is pulled, sounding the alarm

Inside the Katana box is the main device, called the Arc, along with a start up booklet. That's it. Everything you need to use Katana is included in the Arc itself. The one we tested was lavender, but the Arc comes in ten colors from basic black and white to red, pink, purple, dark pink, baby blue, silver, gold and our lavender option.

On the back of the Arc is a sticker. Peel this off and place it against the back of your smartphone. You'll also need to download an app — available for both iOS and Android. A two-year battery is built into the Arc, so it won't need charging before you start using it.

o get the Arc up and running, press on the oval depression located on the center back of the device, until the red light starts blinking at its base. Then you can start to pair the Arc to the Katana app. If you see a blue light, that means the Arc isn't connecting to Bluetooth or location services are turned off. Just make sure the later is turned on, and try to link to Bluetooth again.

While it really could not be easier to add the Arc to a phone, it certainly is big, heavy and bulky. If you're someone who likes putting a smartphone in your pocket, the Arc is going to make this more difficult. I will say the adhesive stuck to the back of my smartphone case easily — and it never once shifted or fell off. I also found it was fairly easy to take the Arc off the phone case as well.

Katana Review: Setting up the app

To set up the app, you'll add in your name, email, and crucially you add contacts. After paying for the $149 Katana, you have an option at set up to either subscribe to Katana's 24/7 service, or not, which costs $9.99 a month or $99 a year. That feature brings help through a service that can see where you are, and also reach out to emergency teams for you.

You can, however, use Katana without signing up for a service, just by adding up to seven contacts to what Katana calls your Safety Circle. You'll want to make sure they've agreed to be on your list, as these are the people who will get text messages and even phone calls should you sent off an alert.

Katana sends alerts to contacts, letting them know when you've set off an alarm through the Arc

You get help through Katana three different ways. First, you press the depressed button on the back, holding it for three seconds or pressing it three times in a row. Another way is to pull the red tab in the back, which will set off two quick warning chirps and then a 125 deniable alarm — which is loud. Finally, you can unwrap a cord from around the arc and then place this around the wrist. When the Katana is dropped from your hand — still attached to the wrist — to sets off the alarm.

For the test, we did not activate the subscription service, as we wanted to see how the free services would work. In this situation, your contacts get alerts that they've been added, and without a subscription these people are crucial to Katana working. When you press the button on the back for three seconds, or press three times in a row, your contacts get an alert through a text message and also a phone call. Your contacts are also alerted if you activate the panic alarm.

I found this scenario a bit spotty — if only because our contacts did not always respond quickly, or at all. First they received an alert that showed up as a pop up on their phone, even when it was locked. It did include my name, and that I had triggered a silent alert on my Katana safety device when I pressed the back button, or a panic alert when I pulled the red tab and set off the alarm.

Here's the problem: Many of us have our phones on silent, with our lock screens so cluttered from news alerts and other notification, that we choose to only glance at it periodically, making this kind of alert difficult to be seen.

Katana must understand this because it also calls your contacts — which is a fairly serious intrusion, most of us will agree. But I saw those calls — when shown to me — come up as numbers that were unrecognized. They didn't say Katana, and as such they were ignored. This is something to note, because if you're relying on your friends and family to be your emergency backup, someone in that mix needs to be willing to pick up their phone, or at least glance at it often.

Katana sends off an alarm at 125 decibels, about the sound of a front seat at a concert

As a safety device, Katana definitely has its uses. The alarm is certainly a deterrent. While many people have learned to ignore car alarms, one coming from an indoor space or even an area where cars aren't normally present, and that is 125 decibels loud — about the sound of the front row of a concert or a piercing human scream — is going to get some attention.

I do think, though, that the device is at its best when paired with the subscription service. But fees are hard for some people to accept and buy into on a regular basis. That's why Katana is, in my opinion, a device tailored for a specific market. For parents sending a child off to college, or with children who commute for school long distances, Katana is a solid investment. Some popular tracking apps, like Life 360, have premium services that can cost $4.99 a month. Katana is $5 more a month, but can call emergency personnel when you're not reachable.

Katana is also a worthwhile device to consider for those who are going into unknown spaces, such as people's homes or offices on a regular basis — such as sales people, realtors or visiting care takers. Where Katana may be less useful is if someone is out in an isolated area, where an alarm is not going to be heard, and getting emergency help is going to take time.

The design, while bulky, is certainly going to ensure Katana is always with you — and when it comes to a safety device and tracker, that's the most important element, so you have it when you need it.

Katana Safety Arc: The Personal Security System That Attaches Directly to Your Smartphone. Includes 1 Free Month of the 24/7 Katana Response Center Service. (Ruby Red)
List Price: $99.99
New From: $79.99in Stock
Used From: $45.05in Stock
From Your Site Articles
Related Articles Around the Web
safety trackersmart devicepersonal safetycollegekatanatrackersmartphonewearablefitness
Like GearBrain on Facebook
Lauren Barack
The Conversation (0)