Folding Virtual Reality Headsets: How The Top Three Stack Up

Virtual reality headsets have a reputation of being bulky, heavy, and liable to induce claustrophobia. These three foldable headsets are the exception. 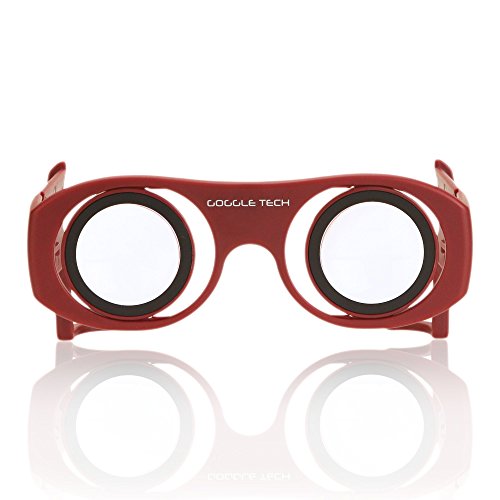 Pros: Extremely easy to use, small and light-weight, a great way to show off virtual reality apps to friends and family.

Cons: Open design makes it less immersive and lets other people look in over your shoulder, while a lack of straps requires you to hold it up to your face.

Goggle Tech's C1-Glass headset is the most compact virtual reality option currently on the market today,weighing in at just one ounce.

The headset folds up almost flat, smaller than a typical pair of sunglasses, and comes with a sleek oval carrying case that fits easily into a purse or coat pocket.

On the positive side, the C1-Glass is ridiculously easy to use. You open up the carrying case, which is a little smaller than a typical hard-sided glasses case, take out the headset and unfold the device the way you would a pair of glasses. The arms, however, don't go over your ears, but stick out in front, and hold the smartphone.

The open-sided design has some other advantages as well. To start, the headset doesn't block your peripheral vision. If someone comes up to you and taps you on the shoulder, you're unlikely to be surprised.

Second, switching apps is easy. You don't need to disassemble the headset to remove your phone, the way you do with some of the ski goggle-style sets. The open design also means that you can easily touch any point of the screen at any time.

Third, there's no need for a button or external controller, as most Google Cardboard applications today have basic interactivity, and work via a simple screen tap.

Finally, because of its open design, the Goggle Tech C1-Glass will not overheat and won't block access to the headphone jack, charging port or the back camera. That last one is particularly useful for augmented reality applications.

The field of view is about 90 degrees, which is just about middle of the road. But this may be the best virtual reality headset to carry with you everywhere — and doesn't look like it was made for a child.

This headset is very similar to the Goggle Tech in that the Baofeng also folds flat, is smaller than a pair of sunglasses, and comes with a case. Here, though, the case is white translucent plastic and not as attractive as Goggle Tech's. Plus the glasses themselves are more angular, and made of a brighter, heavier plastic making the headset feel more like a child's toy.

Now for the positives: The lenses can be moved apart, since the distance between the eyes varies for people. There are a multitude of colors, with the device available in pink, blue, orange and purple and also in black with green trim on the lenses.

I bought mine on AliExpress, where you can get them now starting at around $12 each, but I paid around $7, so keep an eye on the prices. The manufacturer is based in China, but many of the AliExpress listings offer free, quick shipping. It's made by Baofeng Mojing, a Chinese video streaming company that makes some higher-end virtual reality headsets as well.

The device has the same field of the view as the Goggle Tech, about 90 degrees, but weighs half an ounce more due to the sturdier plastic.

This is an excellent virtual reality headset to buy as a stocking-stuffer or to give out as a promotional gift for a company such as a real estate agency or architecture firm.

The biggest headset of the bunch, this one still has open sides, but is enclosed on top and on bottom. What does this mean? You get the benefit of some peripheral vision while still maintaining privacy if you're the device in a public setting.

AntVR TAW is also the only open-sided headset I've seen so far that comes with a strap — making them a great set for watching YouTube videos, since the top and bottom block out the light. The open sides also allows air to circulate — they don't, then, overheat — and the strap lets you use the headset without having to hold them with your hands.

While a bit heavier than the other two headsets, the AntVR also has a slightly wider field of view, at 100 degrees, and uses a better lens for crisp, cleat image. The headset also fits over glasses, and has surgical-grade silicone padding for long-term comfort and easy cleaning.

The top and bottom flaps fold in, with the top flap on a spring to hold the smartphone securely — or to pinch fingers if you're not careful.

However, while the AntVR does fold flat, the headset is much bulkier than the other two, and does not come with a case. Yes, the manufacturer promotes the headset as fitting into the back pocket of your jeans. But I don't recommend carrying them like that.

The strap would also get in the way if you carry them in a purse or briefcase, so I suggest either finding a carrying case or bag to put them in, wrapping them up in its own headband, or using a large rubber band to keep the entire headset all together.

Of all the open-sided, foldable headsets, this is the best one to buy if you don't own any other virtual reality headsets and will be using this as your primarily device for games and movies.