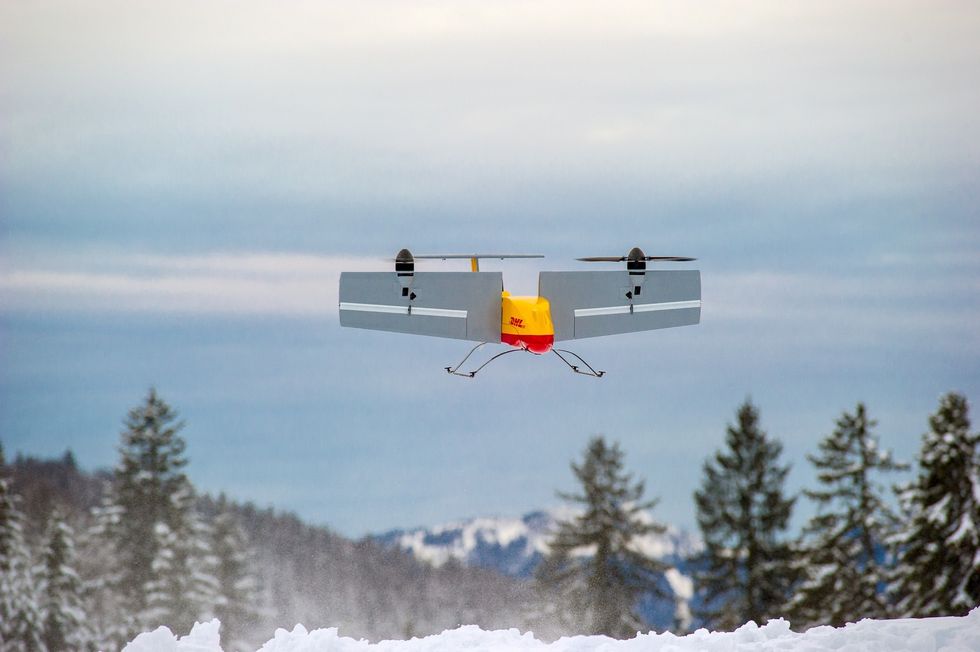 DHL Drone Delivery German delivery firm Deutsche Post DHL dubbed its three-month drone delivery trial "successful." Key to the testing was speed: packages, including medication and sports equipment, arrived in eight minutes by drone, the same distance a car would take half-an-hour to cover. Naming its drone a "Parcelcopter," DHL picked up and delivered packages 130 times in Reit im Winkl, a town in Bavaria, between January and March. Customers dropped the items off at a so-called Parcelcopter Skyport, and DHL sent autonomous drones to do the rest. The German company claims to be the first in the world to run drone deliveries to customers, and is looking to expand its trials. Consumers ordering packages, even take out, by drone, is going to make for some chaotic late nights.

Jumbo Order This phone? Not going to fit in your pocket. Xiaomi's Mi Max, which goes on sale next week, is a whopping 6.4-inches. Why so big? Despite Apple's move to go smaller in its latest iPhone release, many smartphone makers find consumers are eager for larger screens. Tagged phablets, these tablet-phone hybrids pull users into spending more time on apps when using these larger devices—23 percent more time, according to analytics firm Localytics. Pricing for Mi Max is expected to start at $230.

Security Sweep Both the Federal Trade Commission (FTC) and the Federal Communications Commission (FCC) want to know how mobile phone makers and providers secure them. They want to first understand and then "improve, the security of mobile devices," according to one of the letters sent by the FCC. Computer ownership has stayed relatively flat—about 73 percent of all U.S. adults owned one in 2015, nearly the same number as the 71 percent in 2004, according to the Pew Research Center. Smartphone ownership, however, is growing rapidly from 35 percent to 68 percent as of 2015. As more consumers turn to their mobile devices for information and us them to connect with others, keeping these tools secure is a growing concern.

VR Fix One of the known side effects of virtual reality is nausea—especially when used for long periods of time. A group at Microsoft Research may have come up with a solution of sorts by adding LED lights around the VR headset's lenses. The original reason researchers added the lights was to increase the field of view as most VR headsets have a surprisingly large area of blackness on both sides. But when testing their project, researchers were taken aback at the reduction in motion sickness. (Via Ars Technica)

Get Up And Go Withings latest fitness wearable just launched and GearBrain has a mini-breakdown of pricing and features. If you're a swimmer, you'll want to take a look.

Click here to see the best selling drone on Amazon.