Apple has announced the new Watch Series 4 at a media event in California, alongside a trio of new iPhones.

As well as a new design and larger screen, the Watch Series 4 is the first over-the-counter device capable of taking an EKG (also known as an EKG, or electrocardiogram), a test used to check a heart's rhythm and electrical activity.

The new watch is larger than all previous generations of Apple wearable, with case size options increasing from 38mm and 42mm on the year-old Series 3, to 40 and 44mm for the new model.

This means the watches have larger displays, which in turn make space for more complex faces displaying more information at once.

Apple says the screens of its new Watches are 30 percent larger than the Series 3 predecessor. The new Series 4 is also thinner, meaning a lower overall volume than the year-old model. The larger screen means the operating system and apps have been redesigned to show more information on the screen at a time.

Despite the larger display and new sizes, the 2018 Apple Watch Series 4 works with bands from all previous generations of Watch.

The rotating Digital Crown of the watch now features haptic feedback, meaning it clicks subtly when you scroll through items of a list, like tracks on a music playlist, helping wearers navigate through apps and menus more accurately.

Inside, the Series 4 is powered by Apple's new S4 chip, which contains a dual-core, 64bit processor. Apple claims performance is up to two times faster than the Series 3. 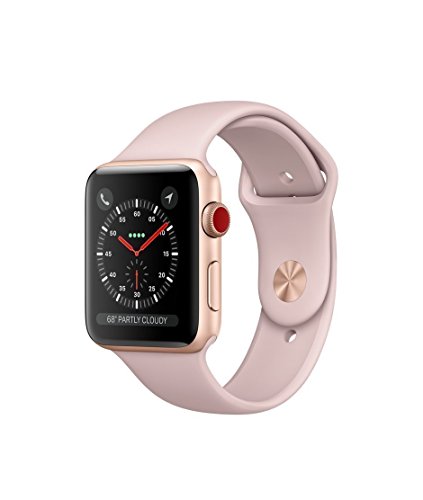 This chip is joined by a new accelerometer and gyroscope which can measure your movements more accurately. Apple says this new hardware means the Watch Series 4 can detect when the wearer has fallen over, and even be configured to call for an ambulance when a fall is detected.

Two new heart-related features include the ability to alert you when your heart rate has fallen too low, and when an irregular heart rhythm suggests the wearer could be suffering from Atrial Fibrillation.

Even more interestingly, the Watch Series 4 can perform an EKG (electrocardiogram), measuring the electrical activity of the wearer's heart. EKGs can be taken at any time by opening the app and placing your finger on the Digital Crown. The crown detects electrical impulses from the heart beat, which then sends them to the watch's processor for analyses. The process takes approximately 30 seconds, Apple says.

All EKG recordings are saved in the Health app on the wearer's iPhone, which can be shared with your doctor via a PDF document. Apple says all health and medical data recorded by the Watch is encrypted and held on the device - not in the cloud.

Crucially, Apple has received clearance from the Food and Drug Association (FDA) in the US, meaning the Watch Series 4 can be classified as a medical device. However, the feature will be US-exclusive at launch.

The new watches run Apple's watch OS 5 operating system, which will be made available to owners of the Watch Series 1, Series 2 and Series 3. Anyone still using the original Watch from 2015 will not be able to update their device to watchOS 5.

The new Watch has a larger display with more detailed facesApple

Despite the new features, Apple says the new Watch has the same 18-hour "all day" battery life as the Series 3.

The new Apple Watch Series 4 comes in silver and space gray, plus a new gold colored stainless steel finish. There are also several Nike and Hermes versions available in both the 40mm and 44mm size options.

The new Apple Watch range is available for pre-order from this Friday, September 14, and goes on sale a week later on September 21.