New features added ahead of CES 2020

A pair of new security cameras from D-Link feature artificial intelligence to tell people apart from other moving objects, and send an alert when they hear the sound of broken glass.

The AI powering these features is so-called 'on-the-edge', which means the processing to identify humans and certain sounds is done by the camera itself. This saves time and means less potentially sensitive data is sent to the cloud for analysis.

Both of these AI features mean notifications sent by the cameras to their owners are more specific and less frequent. Instead of endlessly pinging your smartphone every time a car drives past your camera, alerts will only be sent when a person is spotted (if that's how you choose to set things up).

Likewise, loud noises will be ignored by the camera, but if broken glass is heard - a sign of a potential burglary - a notification will be sent.

The first D-Link security cameras to launch with this new AI are called the Full HD Pan and Tilt Pro Wi-Fi Camera, and the Full Indoor and Outdoor Pro Wi-Fi Camera. They are priced at $99.99 and $119.99 respectively. The former pans in a complete circle to provide a 360-degree view and track motion; the latter is sufficiently weatherproof to be used outdoors.

The outdoor camera also comes with a spotlight and siren for deterring potential intruders; these are both triggered when motion is detected. Both cameras have a speaker and microphone for two-way audio.

Also new for these cameras is an ability to read larger microSD cards than before, this time with a capacity of up to 256GB. Another addition is an Ethernet port, so the cameras can be connected to your router with a stable wired connection, instead of using Wi-Fi which can vary in speed and occasionally drop out - less than ideal for a security camera.

Each of the cameras offers three ways for owners to save video. Most simply, they can store everything on a microSD card of up to 256GB slotted into the camera itself. Alternatively, video can be sent using D-Link's ONVIF Profile S system to a personal NAS (networked-attached storage), in other words, a hard drive connected to your home network. Thirdly, video can be saved online using one of D-Link's free and paid storage subscription services.

D-Link is yet to give its new cameras an exact release date, but says the Pan and Tilt Pro will arrive in the second quarter, followed in the third quarter by the Indoor and Outdoor Pro. 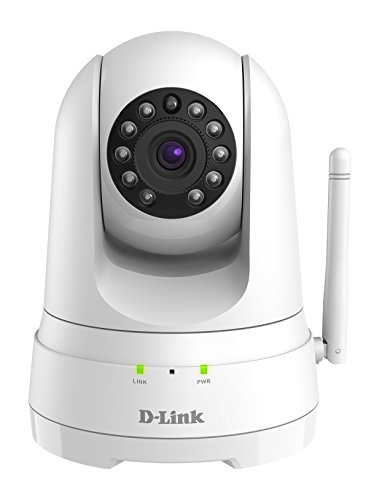