This $99 thermometer works with two meals at once

Meat thermometers can be fairly simple — a metal stick you put right into a cut of meat, and check periodically in the oven, or glance at while on the grill. But these products have evolved into smart devices that can keep track of when your meat is done, and even tell you the perfect temperature. CookPerfect fits into this category, a meat thermometer for those who want to keep track of cooking two things at once, designed for your smart kitchen or an outdoor grill.

The CookPerfect, which the company sent us to test, is a Bluetooth-connected smart thermometer that links up through an iOS and Android smartphone app. The device is actually two parts — a main sensor, and then a thermometer. What's unique about the CookPerfect is the ability to link up two different thermometers to the probe, through two different USB ports on the sensor. It's really ideal for outdoor chefs, those who like to use grills to cook as you can be cooking a steak on one side, pork ribs or chicken on another side of the grill. The probe can also be used inside a smoker, although we did not test that. 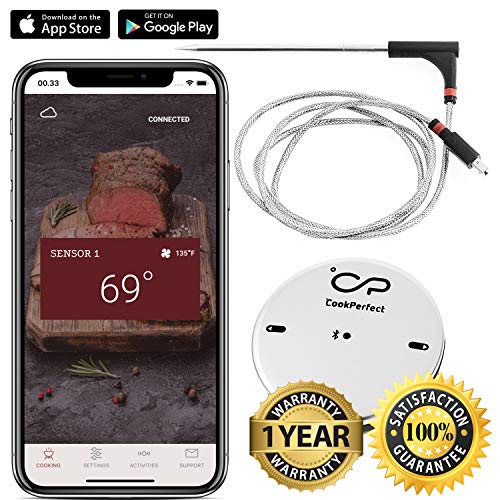 The base is magnetic — you'll be able to keep it attached to a grill while you're cooking, and also to a stove. It's not going to slip around which is nice. The thermometer can also read the temperature at different points within the cut of meat, so it can pick up the core temperature as well as other points throughout the cut.

When CookPerfect is working, a blue light will glow from the topGearBrain

How to get the thermometer working

To start, you want to download the CookPerfect ap to your iOS or Android smartphone. It works with both. What's particularly nice is multiple people can log into the same CloudPerfect Cloud account, which means that you can have more than one person monitoring the meat you're cooking. You can do this through Facebook, or through a separate profile you create in the app. We tend to recommend that you create your own account, and not link through Facebook.

Next, you need to add batteries to the main sensor. The thermometer does come with two batteries in the box – which is great. You also get a small screwdriver, as you'll need to take the back of the main sensor to install the batteries. Keep track of the screws as you do this — they're tiny. CookPerfect says the batteries should last over 150 hours — which is probably several months of grilling and cooking.

One those are popped in, you'll want to slide the thermometer into the USB slot on either side. The CookPerfect will start to blink blue, which is the device looking for the CookPerfect app.

I liked that I didn't have to create an account to get the device working, and we were able to get it started just by linking the sensor to the app. CookPerfect works over Bluetooth — and it has a 400 foot range. That's likely more than enough for you to be in a room near the kitchen, or allow you to pop back into the house (for just a moment, please) if you're at grill.

The app worked well, alerting us a full minute before we had hit the target temperature on our roast — which is perfect if you're in another room so you can check. I was able to be in the living room and still get alerts while the meat was cooking in the oven. I didn't find the app, however, very intuitive and had some trouble even locating presets for the different cuts of meat. I found few presets for chicken, a few for steak but overall we wish there had been more options.

The wire running from the main sensor to the probe also proved to be a bit tricky. At one point, when I was turning the roast around, I forgot about the wire connected to it, and the main sensor got knocked off the counter. In that way, the device limited the way I could move the meat around, or even turn the pan it was in — which I sometimes do to get more color on a piece of meat in the oven. I think this would be less of an issue on a grill.

But bottom line: the thermometer worked very well. I was able to cook a roast easily, which came out brown and juicy — and not overcooked. I definitely would use the CookPerfect again, especially if I were concerned about overcooking meat. For me, that can be an issue.

Priced at $99, the CookPerfect is more expensive than other smart thermometers like Meater, which starts just $69. For that price, though, you get just one thermometer. With CookPerfect, you can pick up an extra thermometer for $45, as the sensor and app can operate two at once. That's about the price of two separate Meater devices.

The CookPerfect attaches to thermometers via a metal wire GearBrain

Should you buy this?

I liked the concept of CookPerfect, with the sensor able to support two probes at once. I did find it required some thinking as I basted the roast — making sure that I didn't pull the sensor to the floor. But as I mentioned above, I didn't think this would be an issue on a grill.

The app was a little buggy and confusing. I did not find it as simple as other meat thermometers I've tried in the past. But there were enough options to certainly cook the basics that anyone would be grilling on their back deck. For a cook who prefers to grill most of their meat, the CookPerfect would be a useful addition to their tool kit.