Motorola's Z Play line of smartphones are a bit of a gimmick: you're getting a phone but you're really buying the option of modular pieces that snap to the back of the device — a Transformer-like experience. There's a ton of options: Extra battery packs, speakers and also a camera. Sure, no tech brand would deign to launch a smartphone without a camera built inside — that's likely the main feature most of use aside from texting and hailing a Via. But the Hasselblad mod is a little outside the mode — a retro throwback to SLR's, when having a real camera in your hand made you consider more pointedly how you framed a shot, how you saw the light and how you wanted to tell a story with a picture. Motorola sent us the Hassleblad mod with a Moto Z3 Play to test, and we spent time across two states trying the camera.

The 12MP camera on the $200 Hasselblad True Zoom comes with a Xenon flash, and a 10X optical zoom and a 4X digital zoom. The zoom quality however didn't produce the sharpest images when tapped all the way. I found the optical zoom of the iPhone X to produce clearer images. The ability to shift back and forth from manual to automatic was simple — even more so than other phone cameras we've used.

You can shoot both still images — and they're also captured in RAW format and 1080p video in full HD at 30 frames per second (fps) with two microphones to capture sound.

This add-on makes you feel you're taking photos with a real camera. The feature works by holding the phone in landscape mode, there's even a shutter button and the phone's lens shifts outward when you launch the camera. The shutter also opens and closes as you shoot — enhancing that feeling of having an SLR in hand.

Hasselblad's name is a big selling point for this mod, and the camera has the look of one Hasselblad's own. There's a solid grip on the side, and the photos the camera shot have solid clarity and color — even compared to the images we've shot with the iPhone X. Plus you also get a free subscription to the brand's Phocus editing software.

The mod is more than a fun add-on, but note that it added substantial weight to the phone — about 145 grams — and made the entire set-up, phone plus camera, nearly impossible to put into a pocket. Because it's both a camera and a phone, it's also difficult to put this device, when the Hasselblad mod is added, down. Why? One side is the lens — the other the Gorilla Glass front of your Moto Z3 Play. So you're going to want to carry a case for the assembled device when both are together.

Should you buy a $200 Hasselblad True Zoom?

Here's the thing: If you're committed to the Moto Z world, this camera is nice extra to own. It's a perfect holiday gift because the mod truly expands the way you're going to shoot. Is this going to create photographs that rival an $11,000 Hasselblad X1D? Not even close. But for anyone who want a little more investment in the way they shoot, maybe wants to dabble in how holding a camera changes the way you look at an image, this is a nice step.

After you've dropped $500 on the new Moto Z3 Play, another $200 is going to feel excessive. For those who are sticking with older versions, but looking to give their modular phones a bit of sprucing, we think the Hassleblad True Zoom is worth a real look. 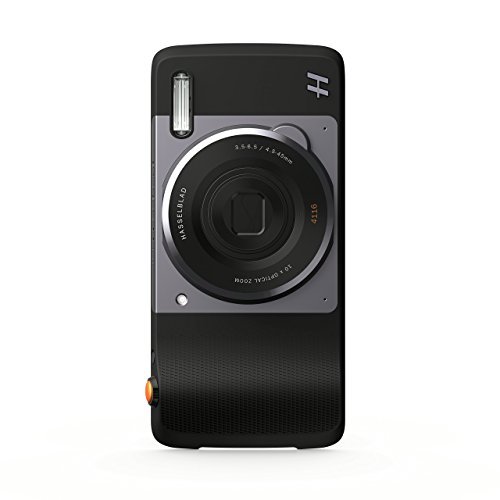