Lenovo's new Mirage VR Camera produces stunning images — some of the best 180-degree photos we've seen from consumer VR cameras. You're treated to true photography options on a virtual reality device: setting exposures and lighting choices that make you feel, as close to as possible, that you're operating a camera — which the Mirage of course, is. 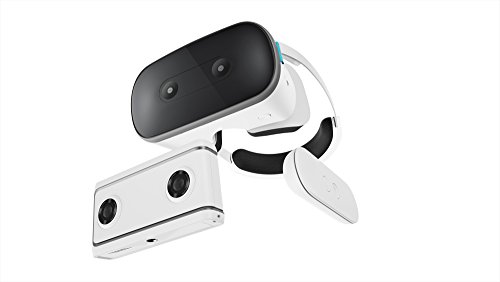 The wrinkle comes in the reality: how much are we using virtual reality images, how easy are they to upload and share with the people we want to impress, and will we bring an extra device with us to shoot these images? Lenovo lent us the Mirage VR Camera to try, and eager to bring some virtual reality juice to our photography, we gave it a whirl.

We almost don't need to talk about installing the camera. It's practically power up and use. The Mirage runs on Google Daydream, its virtual reality platform — which is why you download Google's VR 180 app (iOS and Android) to run the camera as a viewfinder and to access images.

The front of the camera has two 13 MP fisheye lenses, there's a place to screw in a tripod, and three buttons on the top: power, shutter, and a toggle that lets you switch between photo and video mode, plus another that uploads live to YouTube.

The Lenovo Mirage VR Camera works in tandem with the VR 180 app on your smartphone to turn the screen into the viewfinder — and to us, a drawback. As our smartphones get bigger, it's already awkward to hold and operate them with one hand. But if you want to get a real sense of what you're shooting with the Mirage, you really need to see what it's seeing.

You can shoot without your smartphone — the camera works — but again, you're not going to know what you're capturing. With 180 degrees to see, that may not be a huge problem. (Almost everything is getting into the frame.) But without looking at my smartphone, I would not have caught my fingers almost constantly edging into view.

I also had some issues connecting the camera and the smartphone app at times. The app needs to link to Mirage's internal Wi-Fi to work as a viewfinder, and there was a 30-minute hiccup where the camera and our smartphone refused to pair. Although this wasn't a constant issue — and it happened just once — it's worth noting.

You can adjust exposure, lighting and other elements in the Lenovo Mirage VR appLauren Barack

Photo quality on the Mirage is, honestly, grand. Sharp pictures in virtual reality is not something that's the norm, at least in our experience, on a consumer VR camera. The Mirage images are extremely well-rendered. Colors were rich, startling so, and details were crisp. We just wish we could have had more options to share them.

In order to upload, share and view images from the Mirage camera as VR photos you really need to have a Google Photo account. Fair, this is a partnership with Google after all, but not everyone has a Google Photos account — and not everyone wants one. You can move VR versions of the images from the smartphone app without this account by saving them to your own Photo app, and then uploading them from there, but it's less seamless, and we couldn't view them as 180-degree images on our desktop.

You can also view the images through your smartphone as 180-degree images, or as VR images on a VR headset, like the new Mirage Solo, without an issue. But you're going to want to set up a Google Photo account or have one.

If you're baked into Google, that's great. Some of live in a hybrid world — using Gmail, Google Docs and other Google-based apps, but also have another foot in the Apple world, using photos or calendar for example. Honestly, there's rarely a good reason to lock consumers into one system over another. Even Microsoft and Apple learned, eventually, to play nice with each other. We found this Google Photo restriction a drawback.

Ideally, you want a Google Photo account to move VR images off the Mirage camera to a photo stream.Lauren Barack

Should you buy it

At $300, the Mirage is not a small investment. Then again, we think it's a fair price for a VR camera. We also appreciated the fact that the camera comes with 16GB of storage — more than enough to shoot photos for about an hour, along with a two-minute video and never run out of space.

You can certainly view the images on your camera in 180 degrees, and if you have Google Photos you can move these easily from the camera to a desktop and video to YouTube as well. But do we think this is a camera for everyone? Maybe not. The learning curve to shoot, the dependency on Google and the price makes this a hard sell for every consumer save early adopters. But if you're one of those — or you're excited about jumping into VR photography at a very reasonable price — the Mirage is a camera worth a solid look.