For 2020, LG's flagship sound bars will use artificial intelligence to calibrate each speaker, ensuring the best surround sound no matter the shape of your room.

That is at least the promise from LG, which will be demonstrating its smart new sound bars at the CES technology show in Las Vegas next week.

Called AI Room Calibration, such a calibration system sounds similar to what Apple and Sonos do with their HomePod and One smart speakers. In those cases, the speaker makes a series of noises. The sound of their reflections off the speaker's surroundings - ie, your room - is then analysed by microphones on the smart speaker, which then adjusts to improve its output.

We expect to see LG's system work in a similar way, but are keen to see what the artificial intelligence aspect will bring to the party, given other calibration systems are automated, rather than smart.

LG's new flagship sound bar for 2020, called the SN11RG, is a 7.1.4 system, which means seven speakers in the sound bar itself, plus one separate subwoofer, and four rear speakers to sit at the back of your room. These are housed in pairs, meaning each unit contains two speakers, one aimed towards the front of the room, and one pointing upwards.

Joined by a pair of upwards-firing speakers in the sound bar itself, these bounce sound off the ceiling, helping to create the 3D bubble of sound the Dolby Atmos standard is best known for. Along with two facing upwards, the sound bar includes three facing forwards and one firing out of each side of the unit.

We expect to see the new AI calibration system work to ensure the speakers bouncing sound off the walls and ceiling are optimized to work, no matter the shape of your room, or proximity of furniture and other objects.

The sound bar also boasts the DTS:X audio standard, and LG says all of its top models still include audio technology from sound company Meridian.

LG is also launching the SPK8, which is a set of rear speakers that can be added to the sound bars at a later date, if you feel you're missing out on the true surround experience.

The Google Assistant is also built in to these sound bars, making it easy to ask the assistant to play music.

As always, we expect to see a lot more smart home tech from LG and many others on the show floor at CES next week. 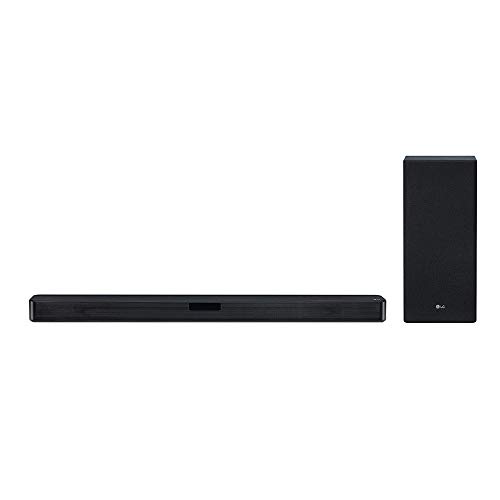