Everything you need to know about Dolby Atmos, the next revolution in home cinema

What is Atmos and how does it work?

Upgrading from TV speakers to a dedicated sound system is one of the best ways to improve the home movie watching experience. A super-slim TV might look great and produce an exceptional Ultra HD picture, but there is very little space in there for good quality speakers.

This is where home cinema systems come to the rescue. For years the go-to requirement for the best sound was 5.1 surround sound. This means a system with five speakers — three at the front, two at the back - and one subwoofer.

Such a setup will drastically improve quality — up the volume, boost the bass and place sound behind you. But now there is a new technology in town, called Dolby Atmos. This is the GearBrain guide to everything you need to know.

What is Dolby Atmos and how does it work?

Dolby Atmos is the latest and greatest cinema audio technology. While it's been available in movie theaters for a couple of years now, the technology is only just starting to arrive at home.

Where regular surround sound systems fire noises from a specific direction — i.e., where the speaker is located — Atmos lets sound engineers place a sound in any location around the audience. This does away with the idea of 'channels' of sound and instead creates one, cohesive bubble of noise, with you right in the center.

Think of this experience as sitting in the middle of a sphere of sound, where each individual noise on a soundtrack can be placed anywhere in that sphere. This means sounds can come from the ceiling — giving the soundstage greater depth than is possible with a traditional 5.1 setup — or even appear as if it is coming from the space between your speakers. 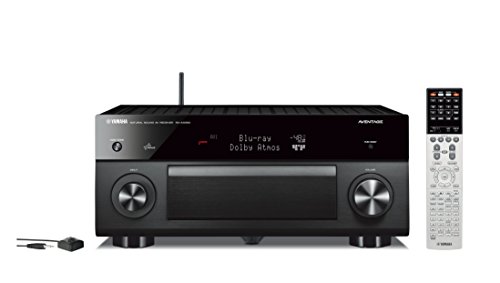 How can I get Dolby Atmos at home?

Cinemas use speakers placed in the ceiling to add height to the sound they produce, and you can do the same at home, providing you don't mind a bit of redecorating.

The simplest multi-speaker Atmos setup is one which takes a regular 5.1 system and adds an additional pair of speakers above the front or the rear speakers. These fire their sound down towards the audience, giving extra height to the soundtrack. Dolby Atmos-equipped AV receivers have a pair of inputs on them to add these speakers, including those made by the likes of Denon, Yamaha, Onkyo and Pioneer, with prices starting at around $500.

Installing speakers into the ceiling, especially wired one, may sound daunting to many readers. Thankfully, though, there is a neat solution; bouncing sound off the ceiling and back down to your ears.

So-called upwards-firing speakers can be located at the front and/or back of your home cinema setup, bouncing sound against the ceiling and back down to the audience. Upwards-firing speakers can be bought in pairs from around $150 and placed on top of your existing front or rear speakers — or on a shelf above, if you prefer. Alternatively, some manufacturers like Onkyo sell an Atmos speaker kit, where the front left and right speakers fire forwards and upwards, and have cables sprouting out of the back for each. Hook those up to the inputs of your Atmos-ready receiver and you're good to go.

This solution will depend on the acoustics of your room — is the ceiling flat? — and whether you have the space for the extra speakers. That being set, this setup is much easier to install than ceiling speakers, simpler to upgrade, and can easily be moved to a different room, or house.

Can I use a sound bar instead?

Yes, and this is the easiest way to get Dolby Atmos at home. Sound bars like the Samsung HW-K950 ($1,200) are Atmos-ready and use upwards-firing speakers to achieve the Atmos sound-sphere effect.

In the case of the K950, the sound bar contains nine forward-facing speakers, plus two upwards-firing. There is also a wireless subwoofer and a pair of wireless rear speakers which each have one speaker firing forwards and one firing upwards. So that's a conventional 5.1 system made up of 11 speakers and one sub, plus four upwards-firing speakers for Atmos.

The result, when feeding the system with Atmos content (a blue light illuminates to confirm this) is stunning. Sound appears to come from the space between the speakers as much as from the boxes themselves. A Dolby-made demo features the sound of a bird flying in a circle around the room and there is no noticeable rise or dip in sound as the noise is passed from one speaker to the next - it is just one, continuous movement which sounds unlike anything we have ever heard outside of a cinema.

Sound depth is impressive, with rain hitting the roof of a car in "Forza Motorsport 7" sounding physically higher in the room than the rest of the soundtrack. It doesn't quite kid the brain into thinking there are actual speakers in the ceiling. But for a sound bar and pair of bookshelf speakers it is very impressive. 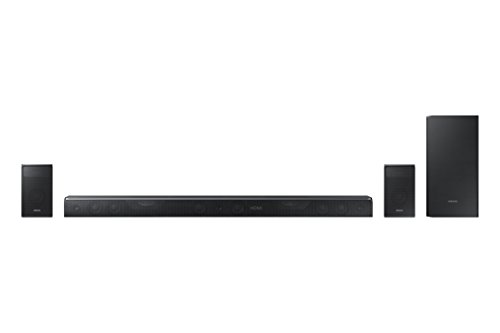 Just like Ultra HD for picture quality, Dolby Atmos is the highest quality, the newest technology — and the most difficult to come by. This will change, just as HD became commonplace, but for now your Atmos options are fairly limited.

Broadcasters are only just beginning to experiment with Atmos and are yet to offer anything in the US. Some UK soccer matches are televised with Atmos, but this is still something of an experiment by broadcasters, with commentary drowned out by a crowd which covers the room with a monotonous din.

In better news, more and more Blu-ray films are getting Atmos every year, and the first two series of Game of Thrones have been remastered with Atmos and are available to buy on Blu-ray now.

Here is a list, updated by Dolby itself, of films with Atmos.

Atmos soundtracks are present on both the regular HD and UHD Blu-rays of these films.

Are there any Dolby Atmos titles on Netflix and Amazon Prime Video?

Yes and no. Atmos debuted on Netflix with the film 'Okja' earlier this year and was joined by 'BLAME!' in July and 'Death Note' in August. 'Wheelman' will arrive on October 20 and the Will Smith action film 'Bright' will come to Netflix with Atmos in December. There will no doubt be more in 2018 and beyond.

'Okja' is one of just two Atmos films on Netflix, for now...Gearbrain

These films are accessible only with a premium Netflix subscription (the same required for Ultra HD and Dolby Vision content), and currently only a few Netflix apps are capable of playing the Atmos soundtrack. For now, this is limited to Netflix on the Xbox One, Xbox One S and upcoming Xbox One X, and LG's 2017 range of OLED televisions.

All that being said, Atmos on Netflix sounds excellent. The opening scene of 'Okja', a presentation given to a theatre audience, shows off the depth and enveloping sound Atmos is capable of. A question asked by an audience member sat somewhere over the viewer's left shoulder also shows off how accurately individual sounds can be placed.

Amazon Prime Video does not yet offer Atmos content.

Do video games have Dolby Atmos?

Yes. The Xbox One (plus S and X variants), PlayStation 4 and 4 Pro can all produce Atmos. Only a few games offer Atmos for now, like "Star Wars Battlefront," "Crackdown 3," "Gears of War 4" and "Forza Motorsport 7", but this will gradually change.

As you might expect, sounds fill the room, appears all around you, and are sometimes almost spookily lifelike. In "Forza," for example, you can hear exactly where rival cars are in relation to your own, even if you can't see them. Rain hitting the roof and sounding as if it is above your head is also a real Atmos highlight.

For now, Dolby Atmos feels a lot like Ultra HD did a couple of years ago. It requires specialist and often expensive equipment to make work, and even after spending a significant amount of cash the amount of available content is severely limited. This will change, just as the situation is changing with Ultra HD, but it will take time. For any early adopters who invest in Atmos now, they have an exciting few years ahead as the technology will undoubtedly spread far and wide.