Sometimes you need to write something down by hand — to be honest, in our digitally driven world, there's something nice about taking a pen and handwriting thoughts and ideas. (There's a reason why adult coloring books, cards and journals sell so well.) Rocketbook's latest, called Beacons, are four small triangle-shaped stickers — that are now on sale for $15 — and work on a whiteboard by capturing everything between them, and cleanly uploading them into a digital file. I tried them with different color erasable markers, and in different light, to see how well they worked.

Beacons are placed in the four corners of a whiteboard, but are invisible in the scanGearBrain

What are Rocketbook Beacons?

The name Beacon implies what these tiny stickers do — they help the Rocketbook app capture an image of what's marked between them, and then send that, like a beacon, to a digital file. There's also a collaboration mode you can use, called Snapcast, which uploads scans of a whiteboard to a designated URL, so people can see every five seconds, as things change.

The stickers are re-usable, so you can move them across multiple whiteboards in an office. Rocketbook wants people to think of the stickers as $15 alternatives to a smart board. And while you can capture information on the boards cleanly into a digital format, Beacons don't turn your whiteboard into an interactive surface. But the images, taken through the app, are remarkable clean — and certainly far better than a snapshot.

How do I use Beacons?

Rocketbook's speciality is turning handwritten notations into digital form. That's the idea behind many of their best-selling devices including the Everlast notebook, for example. That, like Beacons, work through the Rocketbook app. So if you don't have that downloaded, do that first. There's an app for both iOS and Android devices. Then set up the stickers — the Beacons — by just peeling off the clear backing, and positioning them into each of the four corners of your board.

The app walks you through how to grab an image. I had some trouble actually getting the app to take a picture. When you aim your smartphone at the board, you'll immediately see that it's framing around the Beacons. But then, I constantly had the app tell me I was moving too much. I may not be able to hold myself still like a statue, but I certainly wasn't dancing around. Eventually, I could get the app to snap a shot. This would certainly be easier if you mount your phone to a stand.

Here's where we had a huge amount of trouble: we thought none of our images made were stored anywhere in the app. When we went back the next day, they looked to be gone. Knowing how to find them? That was not intuitive, and here are the instructions which you should note:


Sharing them is easy — kind of like other Rocketbook options. You can set destinations in the app through eight different symbols — sending them to one of 11 digital options. These include Google Drive, Evernote, Dropbox, OneNote, One Drive, Trello, Slack, box, iCloud, email and Messages. You can also keep them in Beacons' history — and then send them later.

The app also lets you choose, in Beacons' settings, how to upload your image, either as a JPEG or PDF, bundle them all into one combined PDF, and even create animated GIFs if you choose.

We found pretty quickly that while the images came out clear — flat facing, without borders, looking like a slide — there were shadows that were captured as well, which sometimes looked like smudges. We also saw that for those who like to use colorful dry erase markers, (and if you're don't, why not?) you may discover that some of the tones are more easy to see than others. That's not surprising, but it's a little disappointing. If you're using Beacons to grab notes for collaboration, just be aware that sticking to bright colors — red, blue, black — are your best bet.

Should you buy them?

For those who don't have the funds, or interest, in investing in an interactive whiteboard, but would like to have a way to capture clean shots of a whiteboard, Rocketbook's $15 Beacons are a pretty solid deal. But if you're going to use Snapcast mode, which grabs an image every five seconds to send to others on a shared URL, then you're almost certainly going to need a stand because of the sensitivity of the app and motion. That's going to be an additional investment on top of the $15.

Scan the whiteboard in the app, and from there send the JPEG or PDF to an online file or via emailGearBrain

We were actually curious if Beacon did a better job than the new Scan feature in iOS 13 — so we tested that option. Apple's Scan feature had a hard time deciding which area of the whiteboard to capture and when it finally did, we ended up with something that was more like a photograph than a scan, complete with heavy shadows. Beacons produced a cleaner image.

To be fair, stickers are certainly not going to turn your whiteboard into a touchscreen, and you're not going to be able to suddenly project from a computer or device. But for $15, Beacons will help you take some neater images — and share then with people almost in real-time. Could you set up your smartphone and FaceTime or Skype, or screen share your computer all in real time? Yes, of course. But Beacons are a nice way to capture anything you've written or brainstormed, into a cleaner looking file.

Rocketbook Beacons are now on sale at Amazon and on the company's site for $15. 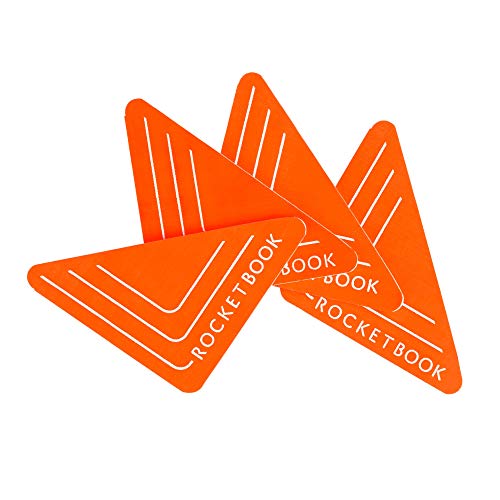 Rocketbook Beacons - Digitize Your Whiteboard - Reusable Stickers to Upload Your Whiteboard Notes to The Cloud with Carrying Case (1 Pack)
List Price: $15.00
New From: $15.00 in Stock
Like GearBrain on Facebook
Show Comments ()
The.Gearbrain