And at $800 it's seriously overpriced, too 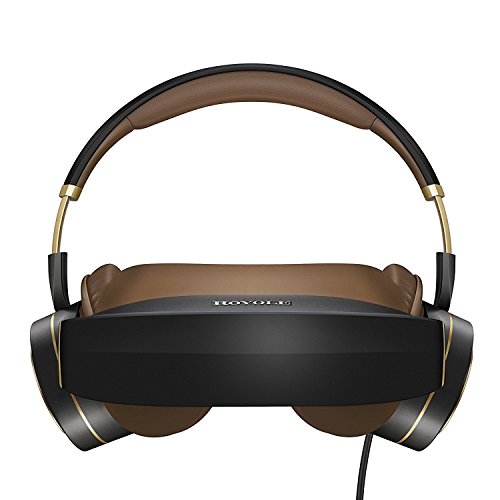 Things hadn't got off to the best of starts for the Royole Moon. While looking like a VR headset, the gadget actually shows normal video, on a flat screen, won't let you move, look behind you or anything like that. And there aren't any games.

Marketed as a luxury piece of tech, the Royole Moon is aimed at frequent flyers who want to shut themselves off from the rest of the cabin (world) while diving into a Netflix binge. They can even tuck into some HD or 3D movies, as the Moon can play a wide range of video formats.

A premium design - with a price to match

The pale gold finish might not be to everyone's taste, but added to the perforated leather-like material it makes the Moon look like a seriously premium piece of kit. And so it should, given the $800 retail price.

Instead of connecting to a computer like the Rift and Vive, the Moon hooks up to an included box which is basically an Android smartphone without a screen. The box contains a processor and storage, and is what powers the headset for up to five hours between charges.

Processing and storage is handled by this box running AndroidGearBrain

As well as accessing video through the Moon's Wi-Fi connection, you can store files on the box, or plug another output device (like a games console or a Google Chromecast) into the box and watch content that way. The Moon runs a modified version of Android, called Moon OS, and apps like Netflix and YouTube can be installed on it.

However, there is no app store. So to get Netflix for example, you have to open the browser, go to netflix.com, and from there you will be given an option to download and install the app, which then appears on the Moon's tiled home page.

If that sounds like a pain then prepare yourself, because there's plenty more where that came from.

For starters, navigating around Moon OS is done by swiping and tapping at the right-hand earphone. Volume is adjusted by running your fingertip along the top of the earphone can, which is actually rather intuitive, but swiping up, down, forward and backwards, then single- and double-tapping on the side of the can itself, is difficult to master.

Because the user interface is flat in front of you, and the trackpad is at 90 degrees to the UI, things quickly get confusing. You've to swipe forwards to go right and backwards to go left. This is just about passable in a simple menu system, but frustrating when trying to move a small mouse cursor around the screen, as you do when navigating Netflix.

And while there's a smartphone app to transfer the task of typing to your iPhone or Android, you need to keep taking the cumbersome Moon off to see what you're typing on the phone. When you do this — and really, whenever you take the Moon off, adjust it and put it back on — you will accidentally activate the touch controls, which more than once meant I lost where in the UI I needed to be.

The software is attractive. but navigating by touch is trickyRoyole

At least the video quality is good

For a sense of balance, I need to mention here that video quality is very good. Unlike the grainy images produced by VR headsets, the Moon uses two AMOLED displays each with Full HD resolution to produce beautiful footage. Contrast levels are broad, footage is pin-sharp and individual pixels cannot be seen like they can in VR.

But, for some reason, Netflix content looks dreadful on the Moon I was sent for this review. YouTube videos look good (despite taking a while to load, app navigation being woeful and occasional lip-sync issues), but Netflix looks like it is being watched through an intermittent 3G connection at best. I have an Ultra HD Netflix subscription and fast Wi-Fi, yet everything I played on the Moon fell short of expectations, especially considering how good footage stored on the device itself looks.

I tapped on 'Okay' but this brought up an instant failure message over and over again. The Moon's operating system is up to date, so I'm not sure what the problem here is. I tapped 'Cancel' and ignored all future update requests.

Back to positives. The Moon's noise-cancelling headphones are magnificent. They produce a deep, rich bass, block out ambient sound well, and offer great detail. Once you load up a high quality video and crank up the volume, the Moon finally comes good.

Despite looking comfortable, the Moon is not at allGearBrain

I want to sit back in my chair and enjoy an HD movie with superb sound on my own massive TV screen, right in front of my face.

But I can't, because the Moon is uncomfortable. No matter what I do and no matter how I adjust the pairs of extending arms for both the earphones and the screen, I cannot get them to sit right. What's most bizarre is how, when first putting the Moon on, I thought I had cracked it. The Moon's considerable 700 grams was shared evenly between my head and nose; the headset sat snugly against my face to block out all ambient light, and it rested lightly on my cheekbones to further help distribute the mass. (For context, the Oculus Rift weighs 480 grams.)

Then I switched it on and found that, in this position, the screen couldn't be seen, as it was right at the very bottom of my field of view. Once I adjusted to make the screen clear, the headset was sitting much lower down my nose. With almost no cushioning here, it became incredibly uncomfortable in a matter of minutes.

Also, because a rectangular display is being viewed through circular lenses, you often cannot see the corners of the screen. When watching video this isn't a major concern, but when navigating through applications it makes things difficult; for example, the search icon in Netflix, in the top-right corner, is difficult to see without moving the headset around. This can be fixed in the settings menu, but only by scaling the display down and making it smaller.

Glasses wearers will be pleased to know that the Moon's lenses can be adjusted from -7.0 diopter nearsightedness and +2.0 farsightedness.

Unfortunately, being accommodating for glasses wearers isn't enough to save the Moon. Not even close.

The Royole Moon is expensive and uncomfortable. It has mediocre battery life, a touch-controlled interface which is unintuitive, fiddly and responds to accidental inputs as you adjust the headset — something you will do constantly and without ever really finding a perfect fit.

The Moon is heavy, cumbersome and lacks the comforting padding of VR headsets. Worst of all is how these issues completely distract from the excellent image and sound quality. If the Moon's UI was much better and its comfort drastically improved (and its price lowered), then it would offer a wonderful experience — so long as you're okay with blocking out your surroundings to watch TV.

But as the Moon is today, I simply can't recommend it. 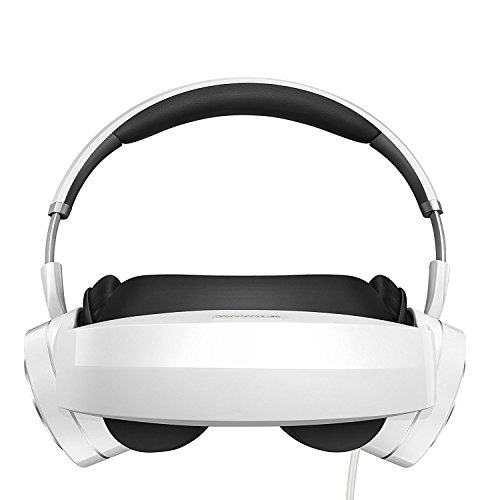