Review: How AmpliFi Can Boost Your Smart Home's Wi-Fi 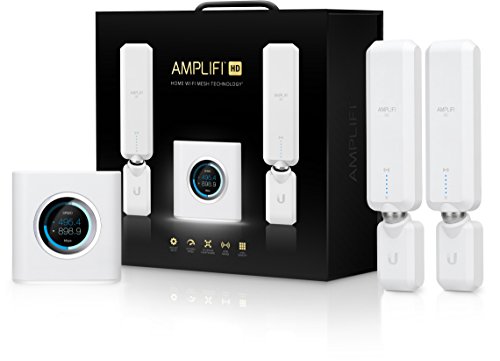 There are two prevailing Wi-Fi mesh approaches. One is deploying a base station connection to a cable modem with a second satellite blanketing the rest of the home with Wi-Fi. The second is a more distributed system in which there is a base station then multiple satellites, often one satellite for each room or area of the house.

It is this last highest-quality system I tested, which is $50 less than the two-piece Netgear Orbi.

The tall satellite nodes have a piece that can pivot at the top, and be pointed towards the base.

AmpliFi's aesthetic is unique among all the mesh systems. Instead of nearly identical base and nodes/satellites, the AmpliFi base is a 4-inch square cube with a white monochromatic touchscreen on the front that cycles through four displays: time (12 or 24-hour), cumulative data, network speed, and system information, all of which also is found in the app. Other than the time, I found little use for the information on the other screens.

In the app, you can adjust the screen brightness and switch to a night mode that turns the display off in case the base is placed in a room where its glow would be distracting.

There are four Ethernet jacks on the back of the base, so it can serve as a router.

Uniquely, the two-inch-wide, 10-inch tall satellites are actually two pieces; a three-inch tall base with a grounded (three-pronged) outlet, and a 7-inch tall upper antenna piece connected via a magnetic pivot. You can tilt the antenna 45 degrees down and around 180 degrees, all of which allows you to generally point it in the general direction of the base.

As a result of this configuration, the satellites are designed to be plugged into three-pronged wall outlets like sconces, which could be a problem if you need to plug into an outlet strip. Most satellites from other mesh systems are free-standing using two-prong jacks.

Unfortunately, the satellites lack auxiliary Ethernet jacks, so you can't physically connect a device to it as you can with satellites from other systems. 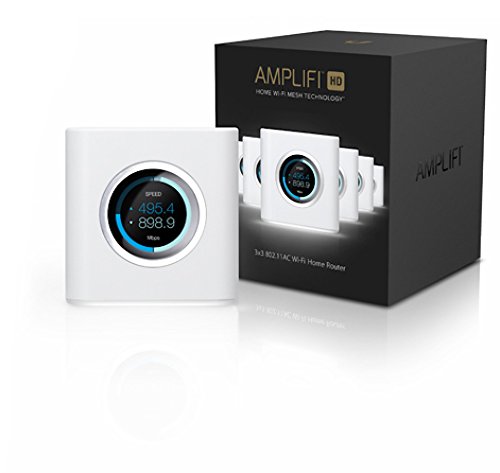 AmpliFi HD's setup couldn't be simpler. An app guides you through the process, or you can use the touchscreen on the base combined with a web browser on a tablet or PC. A printed manual also is included.

As with all mesh systems, you power down your modem, connect the base to it, then power both on. In the app, you can name the network and create a password; it's likely the system will want you do perform a system firmware update via the app, which should take less than five minutes.

If the connection with the base isn't as strong as you'd like, you can pivot the satellite head so it's sort of pointed toward the general direction of the base.

And that's it. AmpliFi was among the pain-free mesh systems to set up.

AmpliFi will display download and upload speeds on its app.

On my MacBook Pro, AmpliFi averaged around 110-150Mbps up to around 50 feet away with the usual wall obstructions. Downloading a 3GB file took around 10 minutes, ranking behind only Orbi and Portal.

As long as you don't have too many people streaming 4K video simultaneously, AmpliFi ought to provide plenty of bandwidth in each room of most American homes.

AmpliFi comes with a base plus two nodes in its basic set-up.

I'd recommend AmpliFi HD for expansive homes with thick or steel-reinforced walls filled with mid- to heavy users. A system with a centrally-located base and satellites toward the sides of your home will get everyone the Wi-Fi they need, even upstairs and down.

If your home isn't a mansion built like a fortress, you can certainly get away with the basic or LR AmpliFi system to save a bit more. 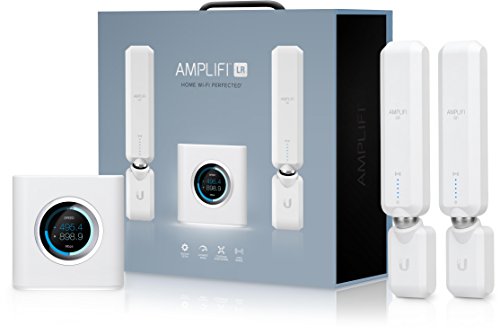