Kano Star Wars Coding Kit Review: Children use the Force to learn how to program

Teaching kids how to code has been a primary focus for Kano and its kits. The latest riffs off the Star Wars world, a hybrid toy and online site that unlocks the basics of block coding, one of the easier ways to teach people of all ages the idea behind programming. Kano's Star Wars The Force Coding Kit is in line with its other film partnerships, like the Harry Potter Kano Coding Kit, which wrangles the excitement of a franchise's characters and activities, only here you're wielding a virtual light saber controlled through a motion sensor that kids build themselves.

Kano's Star Wars coding kit is as simple as they come, a build your own controller, plus activities tied to a web site, where children can share their own programs, or just play those created by peers. The key to the toy is a motion sensor, moving your hand across it — using The Force — controls different elements of the toy whether that's a light saber or a robot. Players write code to change what the controller commands.

Players can build their own controller, with batteries, a circuit board and sensorsGearBrain

Inside the $79.99 box includes parts to build the controller. These include motion sensors, a light ring, a case, a power button, batteries, stickers and more. The hardest part of this installation is going to be snapping the parts together firmly enough. Once the controller is complete, you'll need to download the Kano app to either a computer or a tablet, and the app does work in both the Mac and PC environment. 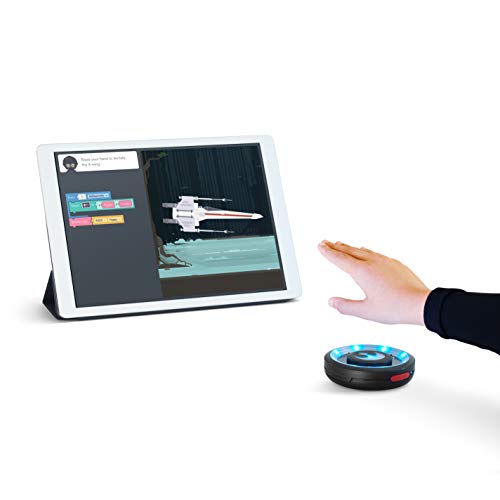 Create a user name — Kano will suggest one — and a password, and then enter an email address for a parent. This generates a note to an adult that a child wants permission to play games online that others have coded, or share one they've written themselves. As this is the primary reason for using a Kano coding kit, parents should try and grant permission.

Players get to customize how the look of their lightsaber, online, appears from changing the hilt and the color, and can choose if they want to fight for the resistance, or join the dark side of the force. The sensor also comes with two different icons, to make that alliance clear as well.

For kids who've never written code, Kano is one of the best — with hand-holding that almost ensures you can't get the programming wrong. The company uses block coding, which is as it sounds, blocks of code that you drag and drop into place. Likely, within a very short time, players will graduate to the next level of programming, maybe trying their hands at JavaScript, for example. But being able to play in a coding sandbox like Kano's is a good way to teach the basics with some solid help, including icons that blink to show you where to drop your next set of lines.

The Star Wars kit plants players in the world of Jedi and Stormtroopers. You're guided by a robot named K-4NO (yes, we see that name play too) and walked through basic coding challenges from moving a lightsaber, piloting an X-Wing or TIE fighter, or usingThe Force. Kano appears to be adding more to the challenges available: One called "Influence the Weak Mind," was grayed-out, with a bar that said it was coming soon.

Code is designed to integrate the controller, or motion sensor, into an activity. Some code generates light saber sounds, or lights up the controller as you move your hand forward, back, up, down or around.

Once a player has finished their challenges, they can start coding on their own, or check out what other people have uploaded in the Explore section. All make use of that controller, waving their hand to help Boba Fett escape or race BB-8 across a desert planet. We found more than 100 programs to play with when we logged on to play.

You'll spend $79.99 for the Kano Star Wars The Force Coding Kit, although you will need a computer or tablet to play this — it isn't self-contained by itself.

Kano is a solid brand in terms of linking coding to kids' interests, like Star Wars. With the final installment of the original nine-part saga coming at the end of 2019, excitement around this franchise during the holidays this year is going to be at a peak. For kids (and those who were once kids) who have fallen in love with that galaxy far, far away, toys that tap the Star Wars fandom, but also teach coding, are, we think, a solid choice. Plus we love — we always love — toys that let people physically build, and engineer, something as well.

We suspect the Kano toy, as with all beginning block coding sets, will be something children will quickly outgrow. But tying coding lessons to the Star Wars universe (or the Harry Potter universe) is a nice way to slide beginning coders into the world of programming. Every child today is going to need to understand the basics of coding — every adult today should understand them as well. Where adults may see the Kano Star Wars Coding Kit as learning opportunity, children are likely the kit as a gateway to play with Rey, BB-8, Chewbacca and their other heroes. When learning feels like fun and games, there's no better gift than that.

Cons:
From Your Site Articles
Related Articles Around the Web
toy reviewstar warskanomotion sensorchildrenholidaysstem skillseducationaltoy
Like GearBrain on Facebook
Lauren Barack
The Conversation (0)