Do plants really clean your office air? How to take a smart home approach

It's a commonly held belief that certain plants can help clean the air inside offices and homes, with claims that they remove pollutants and even help to improve our concentration and productivity.

Do plants really clean the air?

The short answer is yes, they do, but only by a very small amount. Most claims that plants clean the air cite a 1989 NASA study commonly referred to as the NASA Clean Air Study. Researchers in the study wrote that, as well as absorbing carbon dioxide and releasing oxygen through photosynthesis, some common indoor plants also clean toxins like benzene, trichloroethylene (commonly found in industrial solvent) and formaldehyde from the air.

The study said that a single plant per 100 square feet of space was all that was needed to clean these pollutants out of the air. But there's a catch — this is 100 square feet of air inside a sealed container replicating conditions onboard a space station.

Clearly, this is not representative of our living spaces. No matter how clean your home office and desk might be, it can't compete against such tightly sealed conditions. Of the plants used in the NASA study, the Peace lily, Variegated Snake plant, and bamboo were among the top performers.

Plants on an office deskGearBrain

While the study proved that certain house plants can remove toxins from the air, NASA admitted that the typical home would need 680 plants to achieve the same pollutant remove rate as seen in the controlled experiment.

More recently, another study conducted in 2014 found that the micro-organisms in the soil of potted plants can also remove benzene from the surrounding air. However, the study concluded that "studies conducted in real-life settings such as offices and homes are few and show mixed results."

Which plants can survive in an office environment?

Unless you are lucky, your desk is likely treated to very little natural light. This can be a problem for many plants, but some particularly hardy species will thrive almost no matter where you put them. As such, these make great options for your desk. Species of plant which are considered office-friendly and almost indestructible include:

So far, so simple. Buy yourself some of these plants and your home office will look smarter, but it might not really act much smarter. Thankfully, there are a few smart pots on the market to help change this.

Now shipping after a successful crowdfunding campaign through Kickstarter and Indiegogo, the Natede is a plant pot, air quality monitor and air purifier in one.

The Natede uses a fan installed beneath the plant to boost its natural air purification process. By increasing the passage of air through the plant, and particularly around its roots, it purifies the surrounding air more quickly while keeping its appearance and growth rate as normal.

In addition to the supercharged plant, the Natede is also claimed to use a photocatalytic filter to further reduce air pollutants, viruses and bacteria. Manufacturer Vitesy (formerly Clairy) claims the system also helps to alleviate odors from pets, cigarettes, cooking and mildew. The filter only requires occasional cleaning with water, and does not need replacing like those of most regular air purifiers.

The Natede can be interacted with via Alexa and Google Assistant, plus there is IFTTT integration, so you can hook up the Natede to other smart home devices — for example, you could have a regular air purifier switch on to help out the Natede when particularly poor air quality is detected, like when you are cooking.

Following a similar idea to the Natede, this planter also plugs into a wall outlet and uses a fan below the plant's roots to help speed up its air purifying abilities.

The manufacturer claims a plant in this pot can purify air up to 60 times more efficiently, and also remove toxins, dust, odors and allergens from the air.

We suggest using this planter with a smart plug; that way, you can set a timer or activate the fan using your smartphone, or by speaking to Alexa, Siri, or the Google Assistant. If you set up the smart plug with an IFTTT applet, you can have the planter's fan switch on when your air quality — as measured by a device like the Awair — falls below a certain level. 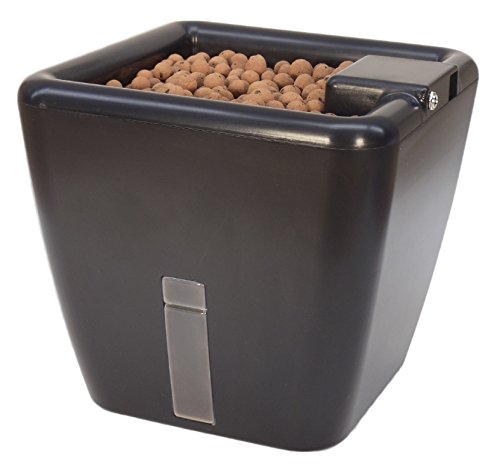 The Airy doesn't use a powered fan, but instead relies on the 'chimney effect'Airy

The Airy is also a Kickstarter success story, and now available on Amazon. But instead of drawing power from a wall plug, the Airy uses the 'chimney effect' to naturally draw air in at the base of the planter, and up through the soil, plant roots and an 'activated carbon' filter. Its manufacturer claims this system makes the plant's air purification abilities eight times more powerful than when in a conventional pot.

The Airy includes a 1.6-liter water reservoir, so you can fill it with water and have the pot feed your plant gradually over several weeks

Finally, we have the sPlant Smart Fresh Herb Garden. Similar to the planters offered by AeroGarden, this is a more compact option which should fit nicely on your desk.

The planter has space for four small plants and an overhead LED light for helping to promote photosynthesis even in a dimly lit workspace. The planter has a Wi-Fi connection and a companion smartphone app, which tells you about the moisture, humidity and water levels of the soil and reservoir, then alerts you if anything needs changing or replenishing. 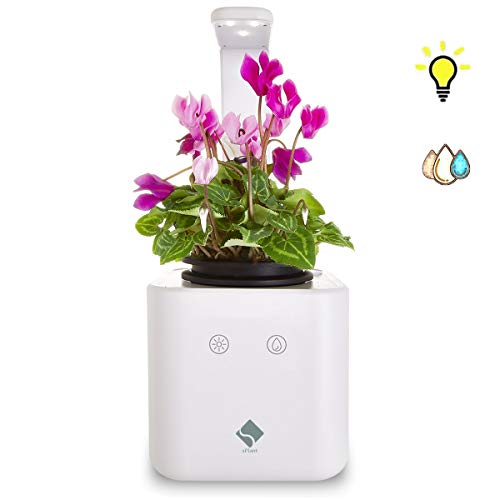 How to check your indoor air quality

There are a number of air quality monitors on the market, but our favorite is the second-generation Awair.

This attractive wooden gadget gives your air quality a score out of 100 and breaks this down into five categories. These are: temperature, humidity, CO2, chemicals, and fine dust.

You can tell the Awair which room it is in, and what you want to achieve (increased productivity or deeper sleep, for example) and the device will help inform you about the air quality, then explain how to improve it.

There is support for Alexa and Google Assistant, so you can ask either about your air quality, and integration with IFTTT. With this, you can create applets which could, for example, switch on an air purifier — or the Plant Air Purifier from earlier — if the room's quality drops below a certain amount.