After a bit of a false start with the Samsung Gear 360 and GoPro Fusion a couple of years ago, 360-degree video from pocket-sized cameras is finally starting to make sense.

The latest offering is the QooCam 8K which, as the name might well suggest, records 360-degree video at 8K. That's a resolution of 7680 x 3840, which is, frankly, massive.

Although still fairly pocket-friendly, the QooCam is larger than its rivals, but that's due to improved optics by way of a 1/1.7-inch, 20-megapixel sensor protruding from each side. But that larger body means there's space for a 2.4-inch OLED touch screen display for watching video back and adjusting settings, and the battery is a respectable 3,600 mAh with fast charging.

There's also 64GB of onboard storage (plus a microSD card slot for adding more), Bluetooth and WiFi. That means you can connect the camera to your smartphone and use QooCam's '8K express edits' feature, which smartly compresses 8K footage without destroying image quality, but makes the files small enough to quickly transfer to your phone.

Video can be viewed on the 2.4-inch OLED display before exportingQooCam

Regular flat, non-360-degree video can be shot too, using a mode called SuperVlog. Speaking of vloggers, the camera offers a 3.5mm microphone socket for improving audio quality. Still images can be shot at up to 30 megapixels and in JPG or RAW.

The camera stabilizes video using both a six-axis gyroscope and software called SuperSteady; we're very interested to see how this will compare to GoPro's HyperSmooth software-only system.

Expected to ship in December, the QooCam can be pre-ordered now and costs $589, which is $90 more than the GoPro Hero Max. 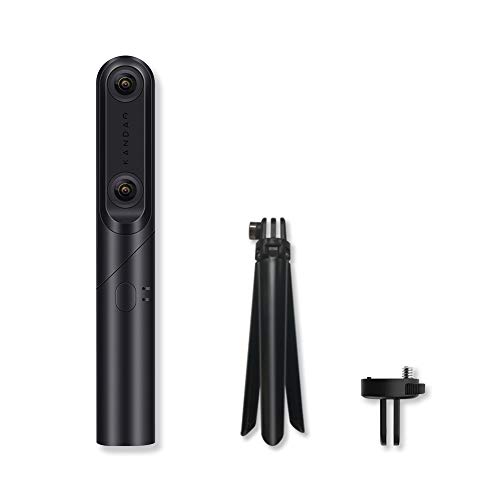