The smart home gadget won't clear the air, but may give you insight on what your breathing inside

While purifiers can clean the air in a space, air sensors tell you the quality. Some read VOCs and the temperature, others add to this list and include carbon dioxide readings and additional elements including showing you the change over time on these details. Air Sensor uHoo falls into this bracket, a slender device that connects to your smartphone and provides data, plus suggestions on how to improve the environment inside your home, office or wherever you set up the sensor.

The company uHoo bills itself as the world's most advanced air sensor. We're going to start right from the beginning and explain that we can't verify on our own the readings we saw in uHoo app. But we did find that based on previous readings, from previous air sensors, there were consistencies particularly around temperature and carbon dioxide. 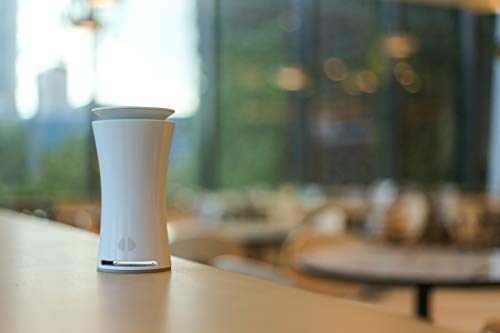 The $329 device is larger than the Awair Glow C, but smaller than the Awair, 2nd Edition— a tall, white curved shaped sensor that looks very similar to a large air freshener. It plugs into an electrical socket, and works by connecting to a smartphone app to deliver data it collects over time. It's designed to really read a single room — and this shouldn't be used to monitor an entire home or even an apartment.

There's a slim opening at the bottom, where we assume air comes in and is read by sensors tucked inside. We didn't see any lights on the sensor, nor hear anything like a fan or other details that showed us that anything was working. But when we opened the app, we could see numbers adjust, and they did shift depending on changes we made such as opening a window.

Carbon dioxide levels increased after an evening of cooking and baking in a closed apartment, according to the uHoo sensorGearBrain

We did not get an instruction manual in the box, just the device, the power adapter and USB cable. Because of that, we're grateful that installing the monitor is extremely simple.

You get uHoo up and running by just plugging it in, and downloading, then connecting the smartphone app for either an iOS or Android device. As with most smart device, you must connect to Wi-Fi as well and create an account. And yes, you'll have another app to monitor daily.

The monitor reads nine different areas through individual sensors for:

You can go into the app to pick up these readings, or you can have alerts sent to you when reading go outside of thresholds that you've set. Most of the time, during the day, with a window open I have a consistent set of green — all levels were fine. But in the evenings, things would shift — particularly one night where we cooked and baked for the holidays, and I saw carbon dioxide level raise substantially. Opening a window? That helped within minutes.

You can also see when readings are fair, with the details turning to a mustard colors, and poor, when numbers are displayed in red.

It's this kind of detail that makes uHoo an interesting product, in that you can track a number of different elements that may be impacting your immediate environment. With the Environment Protection Agency (EPA), noting that we spend about 90 percent of our time indoors, "…where the concentrations of some pollutants are often 2 to 5 times higher than typical outdoor concentrations," notes the federal agency.

Having details, then, on what in our indoor space is crucial. People pay attention to the UV index, and spend between upwards of $61.94 for sunscreens to block the impact of the sun rays, according to a 2014 study. Paying to know what's impact our health inside? That's important too.

But uHoo offers little to explain how it works, nor the details of what's inside the monitor other than the claim of having the sensors inside. We couldn't verify our readings, nor see much on the company's web site that showed in detail the way the device worked.

Initially, we thought the uHoo air monitor did not integrate with other smart device aside from a smartphone. When going into the details on the device, which you'll find under the three dots on the right side of the screen, there are features that allow you to set alerts, share with family and friends, adjust the thresholds and even transfer ownership of the monitor. But smart home connections aren't found there.

To integrate with smart home systems, you need to go under the three lines on the left side of the screen. There you can add uHoo to your Alexa, Google Assistant and IFTTT networks — which means you can create ways to link uHoo to other systems and brands from Nest to Samsung Smart Things. Voice control will work with these as well, and there is also a way to control through mediola. The company also told us more integrations are on their way in coming months.

Adding Alexa is simple — just click on the Alexa icon, and you'll be brought to an Alexa Skill page for uHoo, where you can then give permission to enable, after you link both uHoo and Alexa together. Google Assistant is even simpler — clicking on that icon will then bring up a command that sends control of uHoo to the Google Assistant devices it detects in your account.

Compared to other air monitors, uHoo is priced on the higher end. You'll pay $329 for the device — the app and monitoring is free — which is a bit higher than the $89 Awair Glow C and the $199 Awair, 2nd Edition. But with nine details that uHoo promises its reading, that's more than either offer.

We can't verify the readings uHoo displays (nor any air monitor device), but we can say that changing our environment — such as opening a window, did adjust the levels of temperature and carbon dioxide by decreasing them, making it fairly clear that uHoo is picking up on the air in our space.

We think having a reading that's live is worthwhile in that you can start to make adjustments to your space if you think what you're breathing is unhealthy. An air purifier, for example, could help to reduce fine particles, while opening a window may help to add (or decrease) the humidity in a room.

Having uHoo read our air quality over a week was certainly interesting, and we definitely made use of the data to adjust the environment, the pricing is definitely on the higher end. Do note, though, that you don't have to pay anything extra to get the data, and so you'll spend the $329 once, but won't have to add an additional monthly fee.

We like uHoo, but customers will have to decide if the price justifies the information they're being given.