Could I make chicken, asparagus, rice and a crumble?

I am not much for meals — proper meals. Desserts are my things. So testing the Anova Nano against a cut of meat was fine, but I wanted to see how it could help me with other things. That's why devised a more complicated setup: a full dinner of chicken, rice, asparagus and rhubarb strawberry cobbler. How did it work? Grab a fork, and I'll take you through each step.

Unbox the Anova Nano sous vide, plug the device in, download the Anova Culinary app, and link via Bluetooth. The app is really a secondary add, you don't need it. The app will allow you to walk away from the sous vide, be outside or in another part of the house, and be alerted when something is done. You can also find recipes in the app, or keep track of recipes you've created and named. But it's not required. 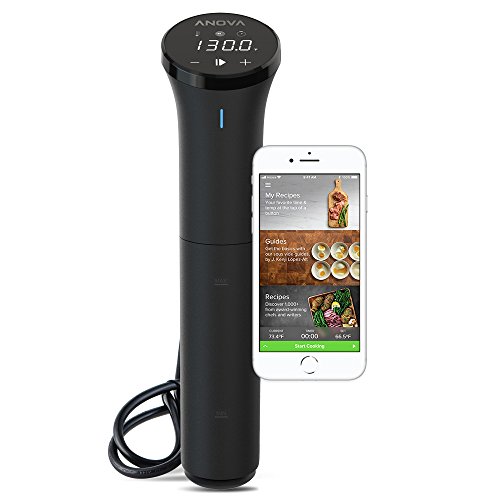 You're also going to need plastic bags, which don't come with it — the kind you can seal and keep water from getting in — and a pot. A sous vide cooks things by surrounding everything with a water bath.

Anova Nano says you can use any pot. This is not correct. You need a pot big enough to make sure the sous vide doesn't sit on the bottom when clamped to the side. Given that the Anova Nano is a tall device — it's 12.8" tall — that's not going to be a small saucepan. I used a mid-sized spaghetti pot.

To keep the Anova Nano running, water must stay above the minimum line on the device for safety reason. But that means if you lift your bag out of the water, and the line goes down, cooking stops. You can restart the sous vide, once the water back above the minimum. But that pause stopped my timer, which I didn't realize until much later in the cooking process. So that was not ideal.

One thing the Anova Nano also won't vocalize: it is not a fast process. Cooking in a water bath is meant to be a slow experience to bring meat to its tender form. But that slow process applies to everything. A hard-boiled egg for example takes 45 minutes in the sous vide. This is not why you buy one of course. But consider this slow-cooking to the extreme.

The Anova Culinary app runs the Nano sous vide, where you can start and stop the device, and also find recipesGearBrain

The Anova Nano app is where you'll start and stop the sous vide itself, set temperatures and cooking times, and also find some recipes. You connect to the sous vide through Bluetooth, as long as your smartphone and the sous vide aren't more than 30-feet apart.

But the app is not where you're going to troubleshoot your sous vide. I couldn't figure out, for example, why my bag wouldn't stay at the bottom of the pot. There isn't even an FAQ. Instead I needed to go online for troubleshooting problems.

The app, as I mentioned, does have a robust selection of recipes — and this is great for those who want to figure out how to start using the sous vide. Some were faulty — I wanted to make rice, and a recipe called for the sous vide to be set to 205ºF, but the Anova Nano only goes to 197ºF so that didn't work.

In prepping the crumble I put the strawberries, rhubarb, sugar, lemon juice and pectin (Yes, I am the kind of person who has pectin at home.) in a plastic bag, and set the sous vide at 180ºF for 90 minutes — which did not include the time to heat the water. Starting at 70ºF meant this would take about 15-20 minutes just to get the recipe going.

A main issue with the sous vide was I couldn't tell how to get my bag submerged into the water completely. There's a clip for the sous vide itself to attach to the pot, but nothing for the food. I improvised and used a large paper clip. I don't think this is recommended.

When the fruit came out, I started on the chicken, selecting chicken wings and drumsticks, four of them, with skin on, and with bones. They took, again, 90 minutes, and when done, I needed to finish them in the oven for about 30 minutes to get that crispiness and caramelized glow.

After the chicken came out, I put in asparagus — which cooked perfectly in about 12 minute, a win. And I also tried rice, which is itself a simple recipe of half a cup of rice and the same amount of water — but for 45 minutes at the highest temperature. Rice itself on the stovetop cooks in 20 minutes. After 30 minutes of preheating and no sign that the rice would be done before everything was cold, I abandoned the rice.

Dinner came out, what was cooked, pretty perfectly. The fruit muddled into a delicious stew that when popped into the oven for 20 minutes for the crumble to brown was warm and delicious, the asparagus was great — and the chicken was by far the best roasted chicken I've ever had. That was a win.

For home cooks looking to better their game, the Anova Nano is a great device: it's not that expensive, it's easy to get started with it, and there are some great dishes that you can perfect. For the occasional cook it's far from a needed device. The Nano itself is not small, and most people won't need one.