Orbi will change the way Wi-Fi connects throughout your smart home.

The two-piece white tower Netgear Orbi system ($399.99) essentially creates a Wi-Fi mesh network for a home less than 4,000 square feet. The router provides coverage for both inside wireless nooks-and-crannies and for devices from smart shades to smart locks, as well as the outside perimeter, to wirelessly connect outdoor cameras, your smart garage door opener, outdoor wireless speakers, outdoor smart lights and any other connected device you can imagine.

If the concept and look of Orbi seems and looks familiar, that's because Orbi is a direct competitor to the smaller but similar eero router system ($349 for a two-pack). Both Orbi and eero are Wi-Fi mesh systems, with modules designed to be placed in multiple locations around your home. The first, would be connected to your cable or network modem, the second you would locate somewhere central in your home but still within wireless range of the first, with the third (if you live in a mansion) on another floor or wing but still within wireless range of the second. All three will then bathe your abode with a single Wi-Fi network.

Unlike a Wi-Fi extender, which acts as if the device is its own device and requires a separate password, multiple Orbis and eeros act as one. That means you only need a single password for your entire whole home Wi-Fi network.

Orbi also follows eero aesthetically, hiding its antennas inside a smooth, white enclosure to make them blend better with (or at least not conflict with) your interior design.

First, Orbi helps you figure out if the satellite unit (the Orbi with the powder blue top) is in range of the one that is connected to your modem (the Orbi with the white top) for optimal placement. After you connect and set-up the first Orbi, the satellite Orbi will glow magenta if it's too far from the original, amber if it's at an okay but not great distance, and green if you're good to go. Eeros lack this range confirmation assistance, which can make placement a hit-or-miss affair. Like the eero, the two Orbis are pre-synced, to automatically find each other.

Second, each Orbi includes four Ethernet jacks on the back, twice as many as eero. In a home theater set-up, you could directly wire an Orbi to your smart TV, your media streamer, your gaming console or other network device with an Ethernet cable, creating a "virtual wire"—as if your smart TV were hard-wired directly to your router.

Third and perhaps most importantly is how Orbis talk to each other. Multiple eeros use regular Wi-Fi to communicate with each other, which could potentially impact the amount of bandwidth available for your wirelessly connected devices. But Netgear has built the Orbis with their own dedicated high bandwidth 5GHz network just so the Orbis can talk to each other. That means you end up with extra bandwidth for the growing number of wirelessly connected devices in your home. And thanks to this dedicated third network, any smart home theater device connected with an Ethernet cable to an Orbi won't detract from the available Wi-Fi for your other devices. 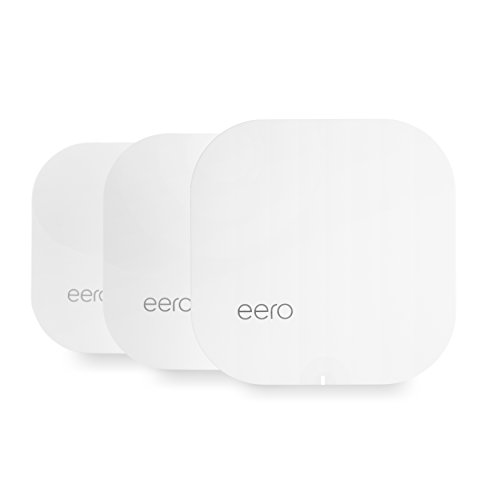 The more connected devices the merrier

The extra Ethernet jacks and this dedicated Orbi-to-Orbi radio with its own antennas is why an Orbi is three times the size of the eero. Like the eero, Orbi delivers 802.11ac Wi-Fi connections on both 2.4GHz and 5GHz frequencies. Both connect automatically to whichever frequency the router thinks is optimal.

Orbi also contains advanced 4x4 (four transmit/four receive) MIMO (multiple-in/multiple-out) antennas that can intelligently dedicate frequencies to specific tasks. According to Netgear, these capabilities, combined with the dedicated bandwidth for Orbi-to-Orbi communications, means that an Orbi system can deliver twice the performance to a single wireless connected device, and actually improves up to three times the performance, when multiple wirelessly devices are connected. Again, that's according to Netgear's own tests, and not our's.

And like the eero—and unlike most standard Wi-Fi routers—Orbi is self-updating; just set it up and it'll take care of firmware updates itself when necessary. Gear heads can futz with Orbi's settings and capabilities with the existing Netgear Genie PC app. A mobile set-up and control app is due in October.

In October you'll also be able to buy a single Orbi for homes less than 2,000 square feet or additional satellite Orbis for large estates. Both will be priced at $249.99 each. We hope to have a full blown comparison of the Orbi and eero by next month, along with an examination of home Wi-Fi and wireless connectivity in general, as this is undergoing a radical change (hint: full duplex DOCSIS 3.1 and next-gen 5G cellular networks).