Updated November 13, 2017 The next episode in George Lucas' Star Wars saga, "The Last Jedi," is set for release on December 15th. Tickets are already on sale for the movie — and Star Wars fans have take to social media to posit their latest obsession: Is Luke the next villain? We'll leave our theories aside (although that looming figure of Luke in the background of the newest poster is a bit Darth Vader looking, just saying) and put our thoughts to this collection of tech gift gadgets and toys that are sure to put your Star Wars fan — and you — at one with The Force.

We're just warning you, but we're fairly certain this robot kit is going to be one of the hottest toys this holiday season. Little Bits is a solid brand — one we're fond of at GearBrain— and the chance to make and design your own droid, and one that rolls around too, is just too good an offer to pass up. At $99.95, the Star Wars Droid Inventor Kit is aimed at kids, but really anyone can get into the designing act: you're encouraged to use materials from the droid body included to a cardboard box. We've already bought ours (Available on Amazon.)

Who doesn't want to wield a lightsaber like Rey? This year you actually can gift that possibility to someone with the new Lenovo Mirage AR headset and the lightsaber controller. The $199.99 kit is available both on Lenovo's site and at Best Buy. Yes you have to wear a headset strapped to your face — but what's nice is the device works with both iOS and Android smartphones. There are cool sound effects, and you'll be able to battle with other Jedi — those on the dark side, we presume. (And if you're looking for more cool VR tech, check out our Holiday Tech Gift Guide for Students. Also check out our full review of Lenovo Mirage AR Headset and the Lightsaber controller.)

The only thing that might make these drones better is if they were big enough to ride on yourself (Next year, okay?) But Propel's Star Wars Elite Fighter Battle Drones are pretty detailed, right down to the Stormtrooper hugging the Speeder Bike above. You — or someone on your gift list — do want these drones — despite the $179.99 price tag. Propel throws in a year of free parts (because these are going to crash) for the Tie Fighter, X-Wing Starfighter and the Speeder Bike — and these drones hit up to 35 mph.. (Available on Amazon.)

Forgot Rey's expression when she spied Luke for that first time at the end of "The Force Awakens?" Relive that look of awe one more time while watching the film projected anywhere you want with the Vivitek Qumi Q6 Projector. The $599 device is steeply priced can share content wirelessly from any iOS and Android device to turn any surface into a film screen, and space into a movie theater. The device weighs just over one pound — making it perfect to bring on the road, to work or even to Endor. (Available on Amazon.)

The Plox Star Wars Levitating Death Star Bluetooth Speaker still registers as — a floating in mid-air sound machine that rotates with just as dark energy as the original orbiting planet-sized weapon. So yeah, it's awesome. And likely someone you're gifting this year will too. Just as it name suggests, the device works over Bluetooth — up to 33 feet away. This tech gift is going to set you back $179.99. (Also available on Amazon.)

BB-8 rolled into our hearts just two scant years ago — and with him came the first mini-robot from Sphero that even wanted to watch himself on screen. Now, Sphero has updated that toy, giving him a few battle-scars — while his humans get to control him with the Force. Okay, so maybe instead this is a wearable device that makes you feel like you're one with the Force. Either way, to gift the Force Band prepare to spend $79.99 — and the device will work with either the original BB-8 or the newer Battleworn edition. (Available on Amazon.)

While Apple's newest iPhone isn't really Star Wars themed, what's more Force-like than opening your phone with your face?The iPhone X is the first Apple device to unlock with facial recognition scanning. Sure, Apple's 10th anniversary smartphone will set you back a cool four figures, at least. But give this to any Star Wars fan and you're golden — at least until 2020 when Apple is reportedly releasing an AR device which could bring holograms like Princess Leia's famous message to reality. 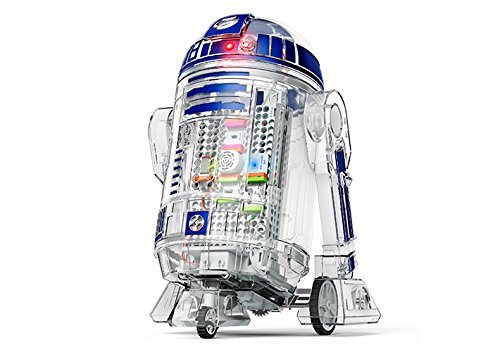