Awair Element: Test your air and see what you’re breathing at home

How's your air quality? This $149 air monitor reads in real-time five crucial elements in your space, and tells you what you may want to change

The new Awair Element is the latest air monitor from Awair, a trim, white device that does little else than tell you about the air you're breathing right now. It really doesn't talk to you, barely sends notifications and can't control your lights or the music in your home. But it does provide immediate feedback about one of the key components in your life — what you're taking into your lungs.

We've tested other Awair devices, including the recent Awair Glow C. But we just put the new $149 Element — which is actually an update to the Awair 2nd Edition— to the test in a Manhattan apartment during the winter, where unrelenting radiators, dust from the street, and lots of people packed inside for long periods of time really gave us some insight on what's happening in our space. 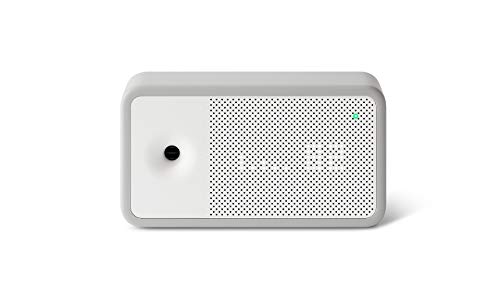 How to get started

The Awair Element needs little to get started. You plug in the device, and then pair with the Awair app. You'll also need to make sure Bluetooth is working on your smartphone. If you have an Awair device — and are adding another to you home, say in a different room, this is going to be easy. The app will find the Element and pair quickly.

If not, download the Awair app and create an account, then allow the app to find your new Element. You can rename it here — we called our device Purple. But you can also name it living room or whatever you prefer to help you differentiate the monitor from another.

Next, you'll want to enable notifications, which will let you know if certain levels are rising in your space and you will also want to choose what the most important thing you want Awair to monitor from this list of five:

I often work in the space I was monitoring, so I chose productivity.

Each element is tracked on the front of the Element as LED lights, and then through color-coded readings in the app. As expected, green is best and red is poor. All of the elements, which include temperature, humidity, CO2, chemicals like VOCs and particulates, are then combined to give you a final score of 0 to 100. You can also move through the specific elements on the Element itself by pushing the button on the back.

In the app, I needed to adjust some small details like changing the temperature from celsius to Fahrenheit. Also, I was now testing the device in New York, while I had tested the last Awair on the road from California.

What Element can do

The main job of the Awair Element is to read five components in the air in a specific space that's about 1,000 square feet. We tested this in an open space, about 700-square feet which included a kitchen and living room.

Awair picks up on the sensors in the device, reading the air that is coming in through the opened space on the left. I found repeatedly that two areas caused the most problems for me throughout the weeks I tested the Element: humidity and CO2. Both made sense to me as I was trying the monitor during the winter, when the humidity was at an all time low, and CO2 would rise as my windows stayed closed to keep my apartment low.

When the levels rose to what the Element deemed outside the good range, I would get a notification on my smartphone and the Element would also scroll this detail across its screen. That reading wasn't easy to read, and only scrolled past once, hence our suggestion to enable notifications through the app.

I'd also get some suggestions through these notifications, like to open the window to reduce CO2 levels. And yes, that would work to lower levels.

You can link the Awair Element to Google Assistant — but not, and this is key, Google Home. We have outlined exactly how to connect Awair to Google Assistant, and once you do you can ask the voice assistant for details about your air quality through the Google Assistant app, or directly from your smartphone if that's the AI you're using.

Awair Element also works with Amazon Alexa, but you can't connect directly through devices — you need to use an Alexa Skill. You need to download the Awair Skill, which we've outlined how to do in detail. From there, you can either use an Alexa device to ask for Awair details, or use the Amazon Alexa app to pull up scores from Awair as well.

You can also connect to other smart home devices including Ecobee Thermostats and the Sensi Smart Thermostats, which can both read Awair Element's readings and then adjust your HVAC system.

The Awair Element can monitor five different levels in the home, and give you one group score ranging from 1 to 100GearBrain

Awair Element is a solid air monitor. As we've mentioned before in other Awair reviews, we can't verify the levels mentioned in the Awair app. But we can certainly tell when the temperature is rising, for example. We also noticed when we were using some dry erase markers about five feet from the Element, that the chemicals levels started rising rapidly. As soon as we stopped using them, they lowered.

We also found that CO2 levels would rise and fall based on the number of people (and our dog) in the room, dropping lower at night when everyone was asleep, and away in the bedrooms, and also when we opened the living room windows. That's why we feel very comfortable trusting the Element for read outs about the air in our room.

Notifications came as levels rose — but also as they started to improve. I appreciated this information, which I could also track — and see changing in real-time in the app.

The Awair Element is $149 — it's actually $50 less than the Awair 2. It's also $50 more than the Glow C, but the Element can also read more including CO2 and particles.

Air monitors are one of those smart home devices that you likely never think to buy. It doesn't control your lights, doesn't play music and won't tell you the weather. What the Awair Element will do is give you feedback on what may be floating in the air you're breathing and impacting the environment where you spend most of your time. The Element also suggests ways — very simple, actionable things — to improve the quality of what you're breathing, even without investing in an air purifier.

The Awair Element is a device that just works: it looks nice, takes up space, and does precisely what the monitor promises to do, tell us what may be affecting the air, and how we can breathe more easily.