Nuraphone review: These wireless headphones tune themselves to your unique hearing

We don't often review headphones at GearBrain, but for the Nuraphones by Australian startup Nura we were willing to make an exception. These headphones, which began life as a successful Kickstarter project, claim to tune themselves to the unique performance of each wearer's ears.

Not only that, but the Nuraphones recently received a software update giving them active noise cancelling, shutting out the outside world and leaving you to enjoy your music in artificial silence. This update on its own is headline-worthy and unprecedented in the headphone industry, but combined with the Nuraphones' unique tuning abilities, we had to give them a try.

Tuning to your ears

Right from the first unboxing, the Nuraphones project themselves as something a little bit different. For starters, the outer box is made from potato starch and is biodegradable. This houses a carry case which closes with a neat magnetic strap and contains both your headphones and a convenient storage compartment for the charging cable. There are three charging cables to ensure the headphones will work with your smartphone, plus an auxiliary cable for hooking them up to a sound system.

Grab the headphones and you might be a little freaked out about how they look. These are over-ear and in-ear at the same time, in that there is a can which completely covers your ear from the outside world, along with an in-ear element, which probes its way into your ears when you put the headphones on.

These don't push into your ears as firmly as regular in-ear headphones, so are more comfortable over long period of time, but it's a weird sensation nonetheless and takes some getting used to as you wear them.

The app shows a unique pattern for your hearing abilityGearBrain

With no power switch, the Nuraphones automatically come to life when you put them on and a voice asks you to install the Nura app on your smartphone to begin the tuning process. It's the kind of voice you might hear in an autonomous car of the 2030s; soft, but reassuring. It's okay, the voice seems to say, this process won't hurt.

Fire up the smartphone app, connect over Bluetooth, and you're ready to begin tuning. The app shows a live view of how well the headphones are fitted, and at first I had trouble getting the left can to sit as snugly as the app required. After a few failed attempts, I adjusted the headphones just enough to get the green light to proceed.

Next, the app plays a range of weird sounds ranging from a deep 250hz to a high-pitched 8kHz. I know my hearing isn't great, so wasn't surprised to feel the sound fall out of range before the test was complete. But that's okay, because the Nuraphones will have picked up on that shortcoming, too.

How does it work?

When sound enters your ears, it vibrates your ear drums. This causes the bones of your inner ear to vibrate, which in turn moves fluid that bends microscopic hair cells in your cochlea. Whenever the cochlea is stimulated, a tiny sound is generated and sent back through the ear drum. Although 10,000 times quieter than the sound going into your ears, this outward sound is detected by a pair of incredibly sensitive microphones, which then help to determine your unique hearing ability.

The test takes just a couple of minutes, and once complete your profile is saved to the app. Now, the headphones know exactly how sensitive your hearing is across the entire range of audio frequencies they can produce.

To be honest, I was a little skeptical about how much of a difference all this would actually make — and when the app offered up an on/off switch for the tuning, I figured the sounds produced when 'off' would be deliberately flat and lifeless, thus making 'on' sound artificially improved.

The Nuraphones fit well, but can become uncomfortable after a couple of hoursGearBrain

But, while I still wouldn't be surprised if that is the case, there is no denying the audio abilities of the Nuraphones. Each earphone includes two drivers, one directing treble and midrange through the in-ear section, and one handing out the bass in the over-ear part. Both do an admirable job, with the bass being particularly well-judged.

Because the bass is delivered to the skin around your ear instead of directly into your ear canal, it can be turned up high without overpowering the mid-tones and damaging your hearing. This is bass you can feel as much as hear, which is rare for headphones.

Within the Nuraphone app you can alter the bass by adjusting the 'immersion mode' setting, from low and distant, to rumbling like you're on the front row. Cranked up to maximum causes the outer-ear sections to physically shake and throb against your skull, but anywhere between 50 and 75 percent produces punchy bass while retaining clarity.

Complex, multilayered electronic music by the likes of Jon Hopkins or The XX is a good way to show off the Nuraphone's abilities, but in reality I struggled to find anything where they didn't sound deeply impressive. From acoustic numbers by Frank Turner and Snow Patrol, to the delicate piano of Debussy, and live performances by The Rolling Stones, the Nuraphones always felt they added something to the mix.

They headphones are both over-ear and in-earGearBrain

I say 'something' because it is hard to put one's finger on exactly why music sounds better with the tuning switched on, it just sounds richer and more clearly defined. I also felt the sound stage stretched more evenly from left to right, counteracting the way music through headphones often sounds a little right of center to me.

Perhaps the biggest surprise is saved for when you tune the Nuraphones for someone else, then listen to how things have changed. Like wearing someone else's glasses, the effect is immediate and pronounced - what sounds great for one person, sounds a mess for anyone else. This, beyond everything else, proved to me that, yes, the Nuraphone tuning really does work.

The Nuraphones are powered by USB but use a proprietary connection, which means you had better not lose the included cable. I'd rather have seen them use USB-C, but at least there are several cables included in the box to work with an iPhone, Android or other device.

The headphones switch on and connect over Bluetooth when you put them on, pause when you remove them, then switch off after a short while of not being worn. There is a circular touch-sensitive button on each side (where the logos are), which can be programmed via the app to play and pause, skip forward and back, or increase and decrease the volume. This is mostly fine, but they are quite sensitive and it's easy to accidentally press them while adjusting the headphones for comfort.

Comfort is mostly good, but can't match a pair of proper over-ear headphones. While the in-ear element doesn't dig deep into your ears like with a proper pair of in-ear phones, it's still there, making its presence felt in the entrance of your eardrum. This is something I would surely get used to in time, but having not worn in-ear earphones regularly for a couple of years, I needed to take a break from the Nuraphones every couple of hours.

Nura claims the cans are vented to encourage warm air to move upwards and pass out the top, as cooler air is drawn in from below. While the physics behind this may be sound, my ears didn't feel any cooler as a result, compared to wearing my own Bose QC35 headphones.

Battery life is a claimed 20 hours, which I feel is certainly achievable, and they can be recharged by plugging them into your smartphone. A full-size USB cable is also included.

Unfortunately, the headphones do not fold up, so travelling with them isn't as easy as it is with others. Another issue is with how there's no on/off switch. This is mostly fine, but sometimes it doesn't work, leaving you with no option but to lay them down for a minute, wait, then try again. 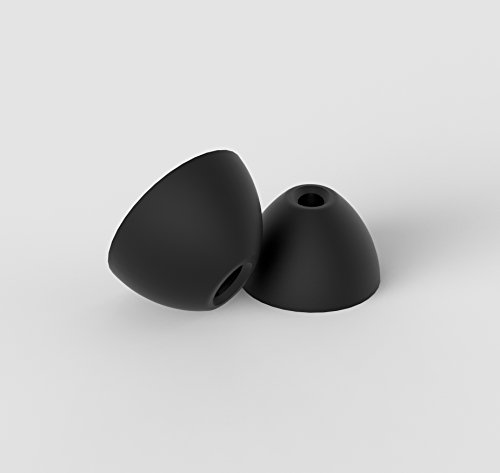 By all accounts, they did a good job at this. But now Nura has released a free software update which brings active noise cancelling to the party, which is an impressive update to say the least.

The noise cancelling works well, shutting out ambient sounds effectively. There's also a button in the app (which can be assigned to one of the touch sensitive buttons) to switch the cancelling on or off.

I can appreciate the courage it will take to ignore options from Bose, Beats, Bowers & Wilkins, and Sennheiser, and instead hand over $400 for a pair of weird in-and-over-ear headphones from a Kickstarter project.

But that project received $1.8 million (having asked for $100,000), then Nutaphone received an additional $7 million from venture capitalists, according to Crunchbase. Although crowd-funded at first, this is a legitimate product which you can buy today.

It is also a very good pair of headphones. The design is attractive and (mostly) comfortable, the noise cancelling performs well, and the tuning party trick has to be heard to be believed. Nura could have just made a very good pair of $400 headphones, but where's the fun in that? And crucially, where's the desirability in that? The Nuraphones offer something truly unique and which actually works.

They aren't quite perfect, but as a first attempt from a startup with a crazy new idea, they are startlingly good.