Cobra VR is a VR headset light enough, and small enough, to carry in your pocket 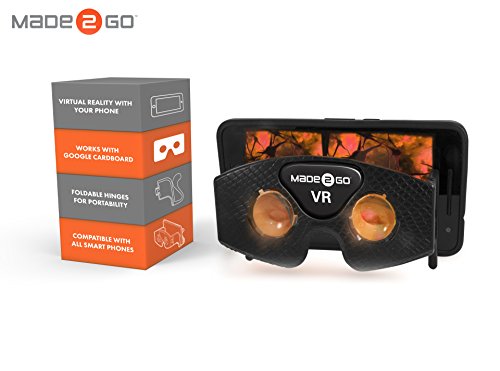 Pros: Low cost, light weight, folds up like a pair of sunglasses

Cons: The open sides make it less immersive and there are no straps, so you will have to hold it up to your face

Of course, style-wise, whether you look like a dork while wearing the headset will all depend on who your personal flair. The black snake-skin style may—or may not—clash with the rest of your outfit and gear.

The field of view is 90 degrees, which is reasonable but not particularly great. The Samsung Gear VR is 96 degrees, for example. At 90 degrees, you will feel as though you're looking at the virtual world through a square mask, so the Cobra VR is not particularly immersive. But then again, this is an open-sided headset, so the viewer is not going to be all that immersive anyway.

The Cobra VR weighs just 2.4 ounces—that's less than half of what your smartphone probably weighs. But the weight itself isn't so much a problem as is the fact that you have to hold it up to your face. If you plan to use your VR headset to watch full-length movies—and some people do—you might want to spring for a headset that comes with straps. And, no, you can't just glue straps to this headset, since it's not designed to be pulled flush against your face.

The lenses are not adjustable, so if your eyes are much closer together or farther apart than average, you might have problems. On the other hand, while you can't change the Cobra VR's focus, you can hold the headset in front of your glasses if your vision requires correction.

Cobra VR works with both iPhones and Android phones that have gyroscopes, which are in most late-model smartphones. There are thousands of compatible apps in both Apple's App store and in Google Play. Plus all YouTube videos, both standard and 360-degree, can be played in virtual reality mode as well.

The viewer doesn't have a button, but it doesn't need one. Since the headset is open-sided, you can easily touch your phone's screen to interact with apps. Plus, you don't have to remove the phone from the headset to switch apps or queue up videos.

After you first get the headset, download the Google Cardboard app for iOS or Android and then calibrate your headset using the QR Code printed on the side. If the QR Code is not there, or wears off, here's a copy for you:

You might also want to get a bag or case to carry the headset in so that the lenses don't get scratched. Some folding viewers, such as the Goggle Tech C1-Glass and the Baofeng Small Mojing do come with cases.

This is a good time to buy a low-cost, easy-to-use headset like the Cobra VR because the new Daydream VR platform is coming out for Android this year, and promises significant improvements for mobile VR. You don't want to invest too much money in technology that's about to become obsolete—and $10 is about as budget-priced as you're going to get.