After buying itself back from Nokia in May, French health tech company has relaunched

Withings has had an interesting few years. It burst onto the scene in 2014 with the beautiful Activite, a hybrid smartwatch with a stylish design and fitness tracking. It could be argued that Withings laid the foundations for the vibrant hybrid smartwatch industry we have today.

Then, in June 2016, Nokia acquired Withings for $191 million, rebranded the company's products with the Nokia name, and began selling them through a new division called Nokia Health. The company also redesigned Withings' fitness tracking app, which angered many loyal users.

Nokia launched a couple of new products during its ownership of Withings, including a sleep monitor and the Steel hybrid smartwatch range. But the company decided, just a year later, that the Nokia Health department was not making enough money, so it was sold back to Withings founder Eric Carreel for an undisclosed fee. Safe to say Carreel paid significantly less for his company than Nokia did.

Now, Withings is back. It has rebranded Nokia's products as its own and this week launched a new hybrid watch called the Steel HR Sport.

Based on the Steel HR, the new Sport model costs $200, has a heart rate monitor, can track 30 different exercise activities, logs and analyzes your sleep, serves up notifications from your smartphone on its small digital display, and is water resistant to 50 meters.

Continuous heart rate tracking is activated when you exercise, and the watch can use your phone's GPS to accurately track outdoor runs.

The watch automatically records walking, running, swimming, distance travelled, calories burned and sleep, and includes a new VO2Max estimation, which is a universal measure of your cardiovascular fitness. All data the watch captures is synced to the free Health Mate app, available for iOS and Android. 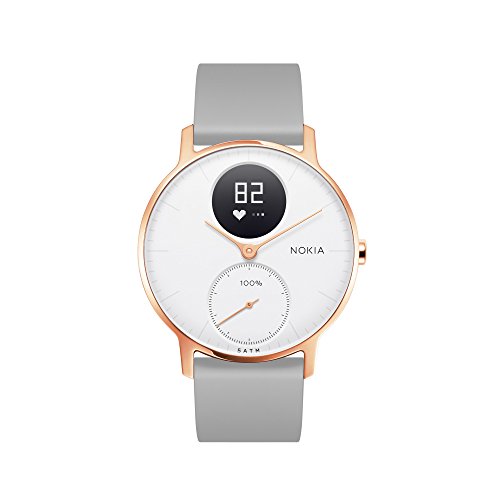 Other activities which can be tracked by the watch (although not automatically) include yoga, volleyball, rowing, boxing, skiing and ice hockey.

Withings says the Steel HR Sport's rechargeable battery lasts for up to 25 days, and recharge time from zero to 100 percent is approximately two hours, or one hour to 80 percent.

The case measures 40mm in diameter - the same as the smaller version of the new Apple Watch Series 4 - and the watch accepts any standard 20mm strap.

"With its advanced sport and health tracking capabilities, Steel HR Sport is a perfect example of how Withings is delivering against its original mission to help better manage health," said Eric Carreel, CEO of Withings. "The public reaction to the return of Withings is extraordinary and renews my belief that elegantly designed devices with health tracking abilities can dramatically improve individual and society's health."

The Steel HR Sport costs $199.95 and is on sale now with either a black or white face and a range of rubber and leather straps.