Lenovo Mirage AR Review: Wield hammers and cast spells as you enter the Dimensions of Heroes

By carrying the mantel of Marvel's cast of heroes, you too can defend the universe

Lenovo's first move into augmented reality toys focused on the Star Wars realm. Now, the company has entered the Marvel world with its Dimension of Heroes, a similar AR game and headset as the Jedi Challenges game, but focused on the heroes Thor, Black Panther, Doctor Strange and others. Having enjoyed the Star Wars game in 2017, we eagerly spent some time playing the new game to see how it held up in the AR gaming space.

What is Marvel Dimension of Heroes

The newest Lenovo Mirage AR toy is designed for the Marvel world, a headset, two handsets or controllers and a center beacon that allows players to engage with the Marvel heroes and take up the fight to save the world. Inside the box, you'll find the above, plus a USB charger, three sets of AA batteries, an instruction manual and two wire connectors designed to link your smartphone to the headset.

The Lenovo Mirage AR headset, controllers, beacon and cables that come with the toyGearBrain

That's key to note: the smartphone. The Lenovo Mirage AR requires a smartphone to use, that's how the story, game and content are delivered to your headset. Unlike VR headsets like Oculus Rift and HTC Vive, your smartphone is the speaker and the screen.

How to get started

The first step is downloading the Marvel Dimension of Heroes app — after all, this is the actual game. Downloading took a bit of time as this is a heavy app, but you'll also need some time to get the headset charged as well. I needed a couple of hours for the headset to get juiced alone.

You're going to install the batteries into each of the two handsets, and then in the center beacon as well. The headset itself is not really powered. Instead, your smartphone needs to be working and open to the app. Launching the app walks you through aligning your smartphone with the headset, and be aware this may take some time.

Each smartphone is often a different a size, and you'll need to make sure the image is centered so that it appears in the middle of the headset. I had trouble centering my smartphone, and finally made use of a small rubber tab on one end of the smartphone cartridge. That put my phone in the right position so it would mirror up on to the headset, and center what I saw. 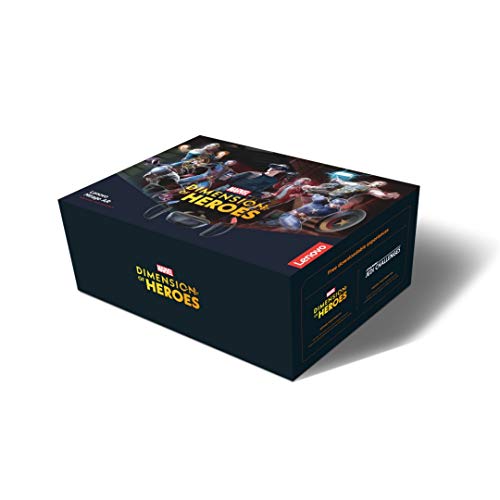 Make sure you get the game to the launch point before you put the smartphone into the headset. From there, put the Mirage on your head, tighten the straps via the Velcro straps, and the use the handsets to start the game. The first thing you'll probably notice? The headset has some weight. You can shift this with the straps, but you'll always be aware you're wearing a slightly heavy headset on your face.

I had some difficulty training as out first character, Thor. (You can choose to play as six different heroes.) Let's just say that the hero-making did not come natural. But within a couple of plays, we felt we could wield a hammer fairly decently. The game moves quickly once you've started. My smartphone, an iPhone X running iOS 13.2, got extremely hot — warm enough to the touch that I was glad, after 20+ minutes, I had pulled the phone out of the headset.

With the Lenovo Mirage AR Marvel game, you can play as one of six heroes, including Doctor Strange and ThorGearBrain

You can choose to play through a set storyline, or just play as if in a video game where you rack up points — and even test yourself on a leaderboard with other players around the world. You can also play solo, or with another person. I didn't have a second headset to test, but I assume that it's similar to the way that Jedi Challenges worked, where both players can see each other in the realm and play as a team.

I found the controllers not always responsive to the game. To wield Thor's hammer, for example, and throw it, you need to press a button and toss in the correct order. Sometimes that worked, sometimes it didn't. That grew frustrating at times, and instead of knocking creatures out of their portals where they appeared, I sometimes found myself in hand to hand combat. I will say that punching at things can be fun — especially when you know these are not real.

Be aware you really need to keep a wide area clear as you try to save the world. I am thankful someone was watching me play. They swooped in and stopped me from stepping on my MacBook Air, an expensive casualty I didn't need to add to my list.

Prepare to spend $249.99 on the Lenovo Mirage AR with Marvel Dimension of Heroes. That does not include the cost for your smartphone — which likely you already have.

Worth playing and buying?

The Marvel Dimension of Heroes set is definitely fun — and feels more physical, and engaging, then the Jedi Challenges set did. (Perhaps I like casting spells and punching the air with a hammer more than wielding a lightsaber.) It is unfortunate that people can't currently buy a new set of controllers as an add-on if they already own the Jedi Challenges. The headset is basically the same — and the content really is coming through a free smartphone app.

This is definitely a big ticket item — and at $250 about $50 more than what Jedi Challenges cost when it first launched in 2017. (You can now pick that toy up for just $69.99.) But there's no question there're enough different experiences, multilayered even further by allowing players to step into six different characters. Marvel fans are sure to love this, as will those who want to compete to see if they really can be the best Captain Marvel, Thor or Black Panther in the world.